Stocks and Economy: Why 2022 May Have Just Been the Preview
“Fight the inertia that will keep you from taking action to prepare for the downturn”

The main show is likely about to begin.

2022 may have just been a preview of what’s ahead for stocks and the economy, which Robert Prechter’s Last Chance to Conquer the Crash warned about nearly a year ago, and our Global Market Perspective discussed at the start of 2022.

Let’s start with that warning from the January 7, 2022 Global Market Perspective, a monthly Elliott Wave International publication which covers 50-plus worldwide financial markets, via these charts and commentary: 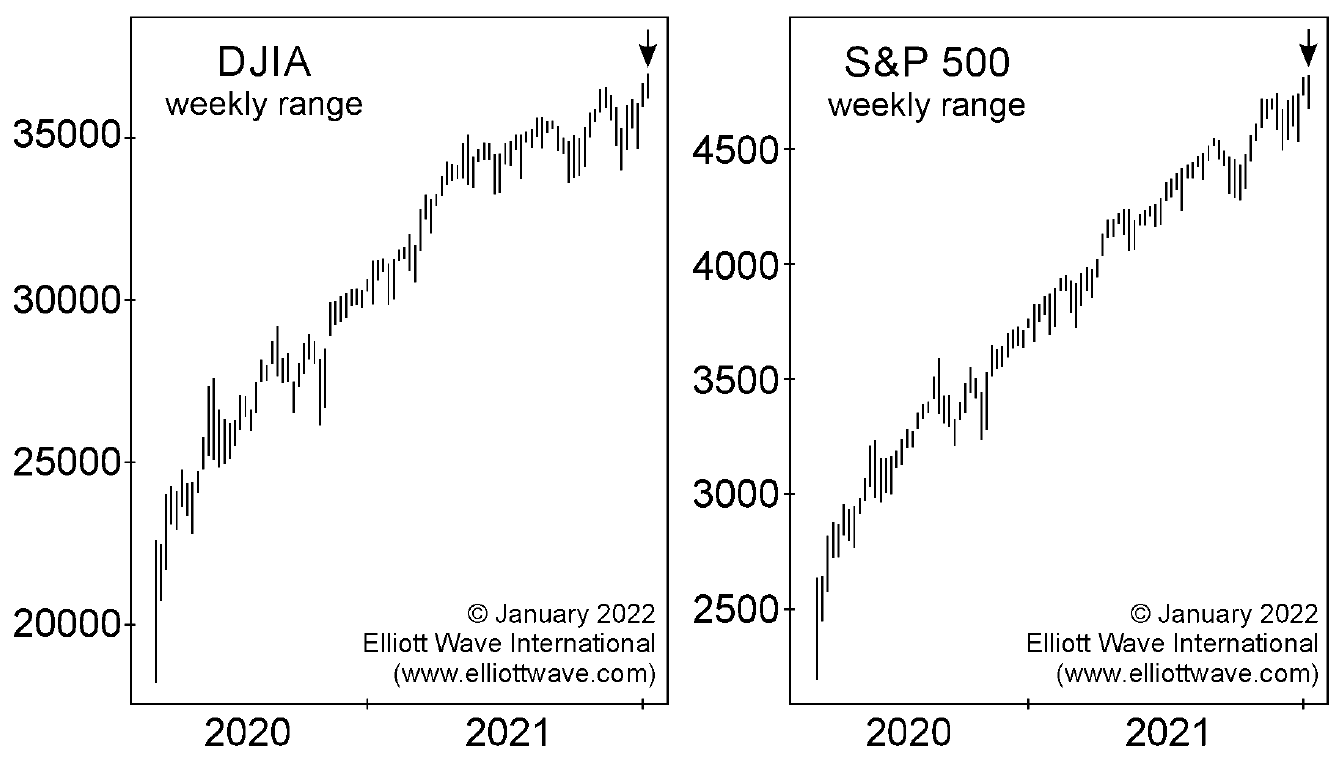 The blue-chip Dow Industrials and S&P 500 … managed to eke out new highs in the first two trading days of 2022. There is a good chance that Wednesday’s trend reversal is the start of a long-term decline.

The “Wednesday” referenced was Jan. 5 and indeed, an all-time high for the Dow Industrials occurred on that very date, with the S&P 500 hitting its high on Jan. 4. Mind you, the Global Market Perspective‘s forecast was made in real-time — just two and three days, respectively, after those all-time highs registered.

As you know, the blue-chips have been in a downtrend since, albeit accompanied by some very sharp rallies — which is not unusual during downtrends.

Let’s now turn our attention to Robert Prechter’s Last Chance to Conquer the Crash, which, as a reminder, published nearly a year ago and warned of a major economic contraction ahead. This is from the book:

Fight the inertia that will keep you from taking action to prepare for the downturn. Start taking steps now. … Think globally, not just domestically.

Yes, when the good times are rolling and stock market indexes are reaching new all-time highs, it can seem unnecessary to prepare for a downturn.

But, as you read these headlines, many people likely wished they had:

There are many more similar headlines.

The stance of Elliott Wave International is that these headlines represent only an inkling of what’s likely ahead.

So, it would be a good idea to keep on top of the Elliott wave pattern of the stock market in which you are interested — whether it’s the U.S., another nation or many nations. Elliott wave analysis will help you to anticipate what’s next for a given stock market index or indexes. Hence, you can also anticipate what’s down the road for the economy. As you might imagine, Elliott wave analysis offers no guarantees, but it’s the best analysis of financial markets of which Elliott Wave International knows.

If you’re unfamiliar with Elliott wave analysis and would like to learn about it, read Frost & Prechter’s Elliott Wave Principle: Key to Market Behavior — the definitive text on the Elliott wave model. Here’s a quote from the book:

Sometimes the market appears to reflect outside conditions and events, but at other times it is entirely detached from what most people assume are causal conditions. The reason is that the market has a law of its own. It is not propelled by the external causality to which one becomes accustomed in the everyday experiences of life. The path of prices is not a product of news. Nor is the market the cyclically rhythmic machine that some declare it to be. Its movement reflects a repetition of forms that is independent both of presumed causal events and of periodicity.

The market’s progression unfolds in waves. Waves are patterns of directional movement.

If you’d like to read the entire online version of this Wall Street classic, you may do so for free once you join Club EWI — the world’s largest Elliott wave educational community. A Club EWI membership is also free and allows you complimentary access to a wealth of Elliott wave resources on investing and trading.