Why U.S. Corporate Bankruptcies Could Skyrocket
“U.S. bankruptcies in the first quarter of 2021 and all of 2020 were above the 13-year average”

An April 17 article headline on the website of National Public Radio says:

Americans’ spending on durable goods — cars and furniture and other goods meant to last a long time — rose at a stunning 41.4 percent annual rate in the first three months of the year.

Considering that the economy is “looking good,” economic observers might conclude that a wave of corporate bankruptcies is of little concern.

However, that conclusion would be off the mark. 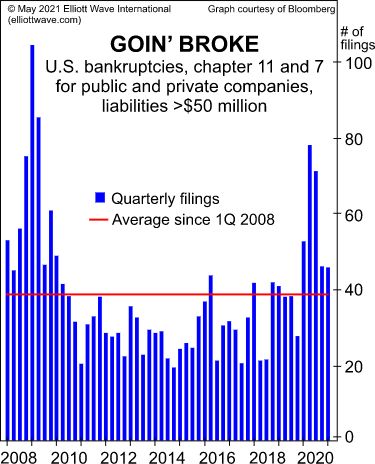 U.S. bankruptcies in the first quarter of 2021 and all of 2020 were above the 13-year average. In March, there were 61 announced corporate bankruptcies, the highest total since July 2020. If companies are defaulting in record numbers in China and at above average levels in the U.S. with interest rates at historic low levels, what will happen when rates rise appreciably?

Understand that in the U.S., “the level of outstanding corporate bonds is the highest in history at approximately $10.6 trillion.” This represents almost half of annual U.S. GDP.

A positive social mood has led executives at many U.S. firms to believe that they can issue and service ever-increasing levels of debt.

But interest rates may rise a lot higher than many businesspeople expect. Hence, many corporate bonds would lose value.

If you’d like to learn about Elliott wave analysis, you can do so by reading the online version of Frost & Prechter’s Elliott Wave Principle: Key to Market Behavior for free. Here’s a quote from the book:

This Wall Street classic can be on your computer screen in mere moments after you join Club EWI — the world’s largest Elliott wave educational community (about 350,000 members and growing rapidly.)

Joining Club EWI is 100% free and you are under no obligation as a member.