Global Tipping Point: “Good” Debt Vs. “Bad” Debt (Which is Winning?)
All major U.S. economic depressions were “set off” by this single factor!

Broadly speaking, there are two types of debt. One of them actually adds value to the economy if handled in the right way, so you might call this a “good” form of debt. However, there’s another type of debt (or credit) which hurts the economy.

A classic quote from an Elliott Wave Theorist provides insight:

Self-liquidating credit is credit that is paid back, with interest, in a moderately short time from production. Production facilitated by the loan generates the financial return that makes repayment possible. It adds value to the economy.

Non-self-liquidating credit is not tied to production and tends to stay in the system. When financial institutions lend for consumer purchases such as cars, boats or homes, or for speculations such as the purchase of stock certificates, no production effort is tied to the loan. Interest payments on such loans stress some other source of income. … Such lending is almost always counter-productive; it adds costs to the economy, not value.

With that in mind, the December Global Market Perspective, a monthly Elliott Wave International publication which provides in-depth coverage of 50-plus worldwide financial markets, mentions “non-self-liquidating” debt as it shows this chart and says: 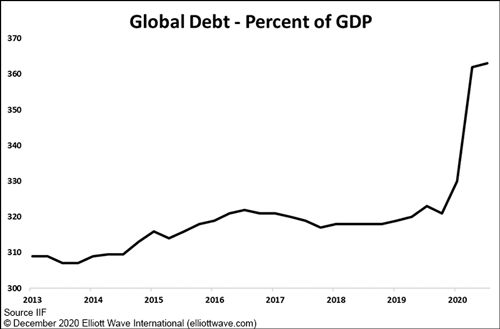 Total global debt has risen dramatically this year and [is expected] to exceed an eye-watering $277 trillion by the end of 2020, [which] will equate to around 365% of global Gross Domestic Product, up from 320% at the end of 2019.

It’s important to know about this big surge of non-self-liquidating debt in the global financial system because it strongly suggests that the eventual deflation of this debt will be devastating.

You see, bank credit expert Hamilton Bolton conducted a study of major depressions in the U.S. and said (Conquer the Crash, 2002):

All were set off by a deflation of excess credit. … Deflation of non-self-liquidating credit usually produces the greater slumps.

And, considering the size of the current debt bubble, the next “slump” may be one for the history books.

Let’s return to Conquer the Crash:

The ability of the financial system to sustain increasing levels of credit rests upon a vibrant economy. At some point, a rising debt level requires so much energy to sustain — in terms of meeting interest payments, monitoring credit ratings, chasing delinquent borrowers and writing off bad loans — that it slows overall economic performance. A high-debt situation becomes unsustainable when the rate of economic growth falls beneath the prevailing rate of interest on money owed and creditors refuse to underwrite the interest payments with more credit.

When the burden becomes too great for the economy to support and the trend reverses, reductions in lending, borrowing, investing, producing and spending cause debtors to earn less money with which to pay off their debts, so defaults rise. Default and fear of default prompt creditors to reduce lending further. The resulting cascade of debt liquidation is a deflationary crash.

As we wrap up 2020 and head into 2021, you are encouraged to prepare for a global “financial earthquake” that may very well rival the 2007-2009 financial crisis.

Get the actionable insights that you and your family need to know from Elliott Wave International’s special free report: What You Need to Know Now About Protecting Yourself from Deflation.