The federal funds rate remains on hold at zero to 0.25% for now, bond purchases should end in March — and then it’s time to raise rates.

The speculation on Wall Street is that the U.S. central bank will raise its federal funds rate by 25 basis points at least twice in 2022. Some Fed watchers expect a bump up as many as four times.

The federal funds rate is the interest rate that banks charge each other to borrow or lend excess reserves overnight and, yes, the central bank sets that rate.

However, what many investors may not realize is that the market leads and the Fed follows. In other words, it’s really the market which determines the trend of interest rates.

The evidence is easily provided. Here’s a chart and commentary from Robert Prechter’s landmark book, The Socionomic Theory of Finance: 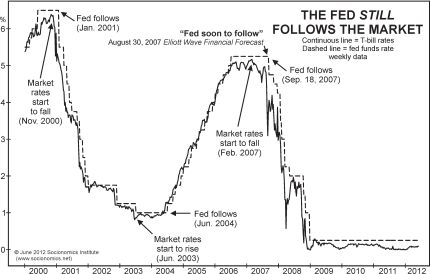 As you can see, the chart shows when the prediction was made and the aftermath.

Financial history shows other times when the market led, and the Fed followed.

But, the evidence shows that the market was leading and the Fed was following — the whole time.

Here’s another chart, along with commentary, from The Socionomic Theory of Finance: 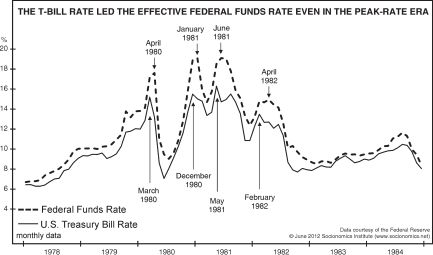 The chart plots T-bill rates and the effective federal funds rate from 1978 to 1984. T-bill rates peaked four times in 1980-1982. Each of those peaks occurred a month or more before subsequent and reactive peaks in the federal funds rate. The Fed’s rate also lags at bottoms, as depicted on the chart at the lows of 1980, 1981 and 1982-3.

The Socionomic Theory of Finance goes on to say:

That interest rates were in a relentless upward trend during the entire decade of the 1970s and that they have been stuck at zero since 2008 — in both cases despite the Federal Reserve’s contrary desires — is powerful evidence reinforcing the point that the Fed is not in control of interest rates.

So, it’s a myth that the Fed leads the way on the direction of interest rates (and bond yields).

Interest rates (and bond yields) are set by the market and in turn, the market is governed by the repetitive — hence, predictable — patterns of the Elliott Wave Principle.

Here’s the good news: You can read the entire online version for free once you become a Club EWI member.

Club EWI is the world’s largest Elliott wave educational community and is free to join. As a Club EWI member, you’ll enjoy free access to a wealth of Elliott wave resources on investing and trading without any obligations.