The European Banking Authority announced Friday that 8 banks had failed their stress tests and 16 more had narrowly passed. But the results drew much criticism from analysts, who said that the stress test is not strict enough.

Indeed, this is something that European Financial Forecast readers have known since the first stress test last summer.

For a unique perspective on Europe’s sovereign debt crisis, we invite you to read a free 6-page report by Elliott Wave International’s European Financial Forecast editor Brian Whitmer, “Credit Crisis in Europe.” Brian has been anticipating and tracking the credit contagion across Greece, Ireland, Spain, Portugal and other EU nations for months.

Credit Crisis in Europe: How the Stability of an Entire Region is Teetering on the Edge of a Major Collapse

Panic Now and Avoid the Rush — July 30, 2010
The market’s collective sigh of relief is also reflected in authorities’ stress testing of 91 European banks. In case you missed last Friday’s results, their message is clear: relax. The Committee of European Banking Supervisors (CEBS) gave passing grades to nearly every bank on its list. The group, for example, passed both Irish banks and all four UK banks that it evaluated. The CEBS gave clean bills of health to all four Portuguese banks, all five Italian banks, and five out of six Greek banks that it analyzed. Even with share prices that sit 29%-66% beneath their 2009 countertrend highs, the CEBS says that the Bank of Ireland, Piraeus Bank, Banco Popolare, and Banco Santander are all in good shape. In fact, just seven of the 91 banks failed to make the grade. Five were in Spain, one in Greece, and one, Germany’s Hypo Real Estate, is entirely owned by the German government anyway. Everyone else — 84 institutions in all — are supposed to be strong enough to withstand another economic shock. 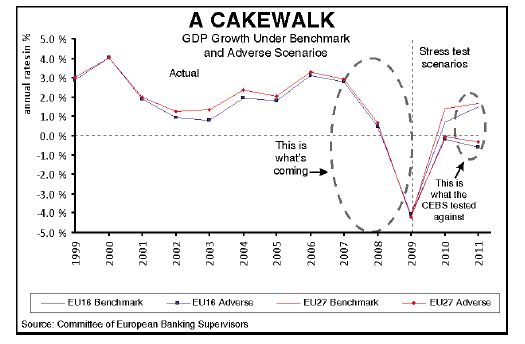 It’s not so much the stellar results that expose the optimism of a Primary degree rally, but rather the Banking Committee’s stress tests themselves. They are notable primarily because they failed to test for any real stress in the first place. As the chart shows, the Committee’s “adverse scenario” regarding economic performance assumed a mere 3% deviation from the European Commission’s GDP forecast. Another test looked at banks’ resilience to a sovereign risk shock, yet the analysis merely used conditions similar to those of May 2010. In other words, just like the UK budget office, the CEBS is utilizing a woefully diluted version of the economic deterioration that is about to grip the continent.
______________________________