To understand the deflation problem, one must understand the nature of money and the amount of total debt in the US economy. In a credit based economy, money is created when banks make loans. Our money supply is not what Bernanke prints, but it is what we borrow. Fractional reserve banking coupled with interest based monetary system is the cause of Kondratieff Wave which defines the economic booms as well as the busts.

The widely reported $16.1 trillion federal debt is a drop in the bucket.

Financial transparency is a must for U.S. publicly traded companies. But if the federal government had to abide by those same regulations, more Americans would know that the often-reported $16.1 trillion federal debt doesn’t come close to the truth about the nation’s liabilities.

The actual liabilities of the federal government — including Social Security, Medicare, and federal employees’ future retirement benefits — already exceed $86.8 trillion, or 550% of GDP.

The authors say that few people know about the $86.8 trillion figure because that figure is not in print on any federal government balance sheet.

Illinois has an unfunded pension liability of at least $83 billion. It had 45 percent of what it needed to pay future retiree obligations as of 2010, the lowest among U.S. states.

The article also noted, “California, with an A-ranking, one level below Illinois, remains S&P’s lowest-rated state.”

Budget shortfalls in California and Illinois are just the tip of the municipal financial iceberg. Many other state governments are financially swamped.

How did municipal spending get so out of control? Well, a stupefying story out of Bell, Calif., provides a hint. On Nov. 26, CNN reports that the Bell police chief earned $457,000 a year, and “He is now asking for more money.” In 2010, the Bell city manager resigned after controversy over his $787,000 yearly salary.

States Are Broke and Approaching Insolvency

… States’ legislatures continue to blow money. For years,
state governments have been spending every dime they could
squeeze out of taxpayers plus all they could borrow. (The
lone exception is Nebraska, which prohibits state indebtedness
over $100k. Whatever Nebraska’s official position on any
other issue, by this action alone it is the most enlightened
state government in the union.) But now even states’ borrowing
ability has run into a brick wall, because the basis of
their ability to pay interest — namely, tax receipts —
is evaporating. … The goose — the poor, overdriven taxpayer
— is dying, and the production of golden eggs, which allowed
state governments to binge for the past 40 years, is falling.
The only reason that states did not either default on their
loans or drastically cut their spending over the past year
is that the federal government sucked a trillion dollars
out of the loan market and handed it to countless undeserving
entities, including state governments.

If there’s another leg of the economic downturn, expect a further dwindling of tax receipts.

Finally, consider the wobbly financial dominoes in Europe and what may happen in the U.S. after the first one falls.

Deflation and the Next Five Years of Financial Turmoil

The following is a sample from Elliott Wave International’s new 40-page report, The State of the Global Markets – 2013 Edition: The Most Important Investment Report

In the first five months of 2012, there were 20 times as many Google searches on “inflation” as there were on “deflation.” This is down from a ratio of 50 times in June 2008. If any theme has been overdone over the past six years, it is the theme of inevitable inflation if not hyperinflation.

But only one word allows you to make sense of what’s going on in the world, and inflation is not it. The secret word is deflation.

Here are some details: Ten-year Treasury notes pay out less than 1.5% annually, their lowest rate since the founding of the Republic. Treasury bills yield essentially zero, their lowest level ever. The velocity of money failed to rise during the past three years of partial economic recovery, and it recently made new lows. Real estate prices have fallen 45% in the past six years. Commodity prices — as measured by the CRB Index — are down 39% over four years. This group includes oil and silver, two of the most hyped investments of the past decade. Remember in March when articles quoted analysts calling for $5, $6 and $8-per-gallon gasoline? In just three months since then, gas prices have fallen 15%, knocking the CPI into negative territory.

Deflation also explains why European loans are at risk, why Germany is tapped out, why Greeks are protesting in the streets, and why U.S. corporations’ overseas profits are down. Deflation lets you make sense of the world.

What is deflation? Economists define it three different ways, but I find only one definition useful: Deflation is a contraction in the overall supply of money and credit.

Why must deflation occur? Answer: There is too much unpayable debt in the world.

As argued in Conquer the Crash, it ultimately does not matter what the authorities do; they can’t stop deflation. This prediction is being borne out. Since 2007, the Fed has monetized $2 trillion worth of debt; the federal government has borrowed another $7 trillion; and it has pumped out $1 trillion worth of student-loan credit. Yet real estate and commodities slumped 40% anyway.

These drunken-sailor-type policies have indeed succeeded in nearly maintaining the overall volume of money and credit.

But in the long run you can’t fight a systemic debt overload by piling on more debt. The Fed and the government are shifting the burden of trillions of dollars’ worth of debt obligations from reckless creditors onto innocent savers and hapless taxpayers. The ploy might work if the public’s resources were infinite, but they aren’t. Perhaps this policy temporarily prevented a series of big institutional disasters, but it was only at the ultimate price of a gigantic public disaster.

Such actions have become politically less palatable. Some observers realize that the student-loan program of lending at below-market rates is exactly the model the government used for housing loans, which ended in a spectacular bust. Others know that the government cannot continue to borrow at the current pace and expect to stay solvent. Politicians on both sides of the aisle are tired of the Fed’s bailing out of highly leveraged financial-speculation institutions.

Ironically, investors in the past decade have been doing exactly the opposite of preparing for deflation. Convinced of perpetually rising prices, they have bought every major investment. They chased real estate up to a peak in 2006. They bought blue chip stocks into the high of 2007. They pushed commodities up to a peak in 2008. They chased gold and silver up to highs in 2011. And through spring 2012, they continued to buy stocks and commodities on any rumor that promised inflation: European bank bailouts, Operation Twist, the Greek election, Group-of-8 summits, Fed meetings, Bernanke press conferences, improved economic numbers, predictions of QE3, central-bank interest-rate cuts, you name it. Meanwhile, the U.S. Dollar Index hasn’t made a new low for four years. During deflationary times, cash is king, and by far most investors have chosen to own anything but cash.

Deflation is still not obvious to the majority. Even now, most economists expect continued recovery, mild inflation and a rising stock market. But the essays on deflation.com are 180 degrees apart from conventional thinking. It may be too late for you to get out at the top, but there’s still time to learn how to sidestep the worst of the crunch.

People will be using the secret “d” word much more often over the next five years. By the end of that time, they will also be using its cousin “d” word, depression.

Two Signs That Deflation is Far From Over

The federal government defines the Producer Price Index (PPI) as “the average change over time in the selling prices received by domestic producers for their output.”

With help from the Federal Reserve’s massive inflationary policies, the PPI has climbed even as the economy began to fall in 2008-09.

All the while, the financial media persisted with stories of an economic recovery. EWI analysts offer an independent perspective.

Corporate America, however, is not so sure. This chart of producer prices [wave labels removed] probably illustrates why. After years of largely uninterrupted growth, the Producer Price Index appears to be on the cusp of a critical reversal that should turn into a steady decline in wholesale prices. 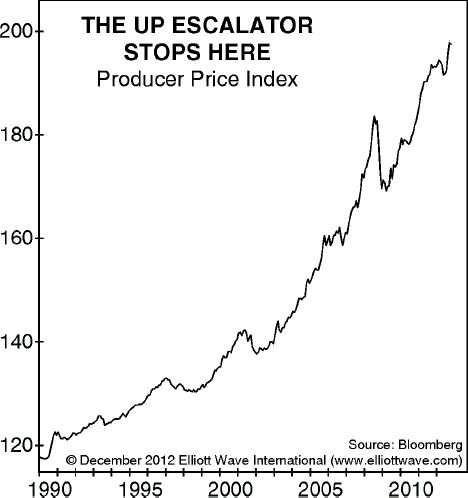 The latest Financial Forecast published Dec. 7,
and the latest evidence reinforces the message of the chart’s
title. The PPI elevator has already descended to a lower floor.

November’s drop in wholesale prices was the sharpest since May.

The Producer Price Index decline is happening in tandem with a notable reversal in consumer sentiment.

The Thomson Reuters/University of Michigan’s preliminary reading of the overall index on consumer sentiment plunged to 74.5 in early December, the lowest level since August.

The Federal Reserve’s machinations — which includes the Dec. 12 announcement of $45-billion in monthly Treasury bond purchases — will not stave off a developing deflationary trend.

In the second edition of Conquer the Crash (p. 114),
Robert Prechter describes what generally happens, depending
on the position of the Elliott waves, near the end of the
Kondratieff cycle.

Near the end of the cycle, the rates of change in business activity and inflation slip to zero. When they fall below zero, deflation is in force. As liquidity contracts, commodity prices fall more rapidly, and prices for stocks, wages and wholesale and retail goods join in the decline. When deflation ends and prices reach bottom, the cycle begins again.

Can the Fed stop deflation? Should you rely on the government to protect you? Get the answers you need now — free! See below for full details.