Here’s what really drives the trends of global stock markets

Let’s first state the obvious: war is tragic as it brings death and destruction.

But does war make the stock market go down?

Many observers seem to believe so. Here are some Feb. 22 headlines:

Certainly, the stock market was headed for a big fall on Thurs., Feb. 24, or so the conventional wisdom goes.

Yes, trading was highly volatile, but by the close on Feb. 24, the NASDAQ Composite was up 3.34%. And, even though the Dow had been lower by 859 points, the senior index managed to close in positive territory by 92 points.

The next day (Fri., Feb. 25), the Dow closed higher by 835 points, even as the war intensified. And, as of this writing intraday on Feb. 28, the S&P 500 went from trading in negative territory to the plus column.

This positive market action in the face of a major global conflict may seem like a head-scratcher to many observers, yet Elliott Wave International has long held that news and events — no matter how major — do not determine the stock market’s trend.

These charts and commentary are from Robert Prechter’s landmark book, The Socionomic Theory of Finance: 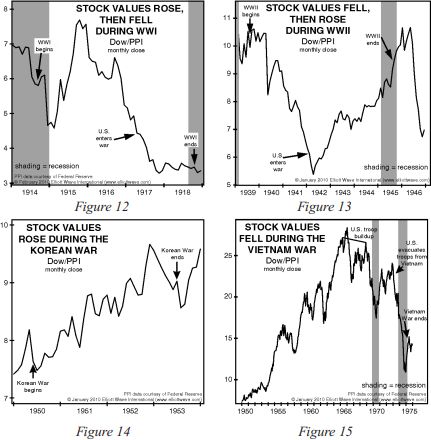 Many market observers also assume that economic numbers, OPEC’s actions, elections, earthquakes and many other events outside of the market cause the stock market to go up or down.

However, just like with war, the evidence shows that this is simply not the case. In other words, events — whether positive or negative — do not reverse the established trend that was already underway before the event.

The real driver of stock markets around the globe is the Wave Principle, which reflects the repetitive, hence, predictable patterns of investor psychology.

Sometimes the market appears to reflect outside conditions and events, but at other times it is entirely detached from what most people assume are causal conditions. The reason is that the market has a law of its own. It is not propelled by the external causality to which one becomes accustomed in the everyday experiences of life. The path of prices is not a product of news. Nor is the market the cyclically rhythmic machine that some declare it to be. Its movement reflects a repetition of forms that is independent both of presumed causal events and of periodicity.

The market’s progression unfolds in waves. Waves are patterns of directional movement.

Good news: You can read the entire online version of the book for free.

That’s right — all that’s required for free access to this definitive text on the Wave Principle is a Club EWI membership.

Club EWI is the world’s largest Elliott wave educational community and is free to join. As a Club EWI member, you’ll enjoy complimentary access to a wealth of Elliott wave resources on investing and trading without any obligation.

Just follow this link to get started right away: Elliott Wave Principle: Key to Market Behavior — free and unlimited access.