Why Next Wave of Margin Calls Will Be FAR More “Disruptive” Than in 2000 or 2007
“Can investors afford to borrow anymore?”

Financial history shows that every bear market has been followed by a bull market and vice versa.

So, the current bull market will end sooner or later.

The prior two bull market tops occurred in the years 2007 and 2000. One of the characteristics of each of those tops was investors’ ramped up use of margin. In other words, market participants were borrowing heavily to buy stocks.

This can work out well until stock prices tumble. Then come the “margin calls” or demands from their brokerage firms to increase the amount of equity in their accounts. Investors who lack sufficient cash to deposit into their accounts are often forced to liquidate securities quickly, which can result in big losses.

Considering what’s been stated, the January Elliott Wave Financial Forecast, a monthly publication which focuses on U.S. financial markets, has a section titled “Margin Debt Mania.” Here’s one of the charts along with the commentary: 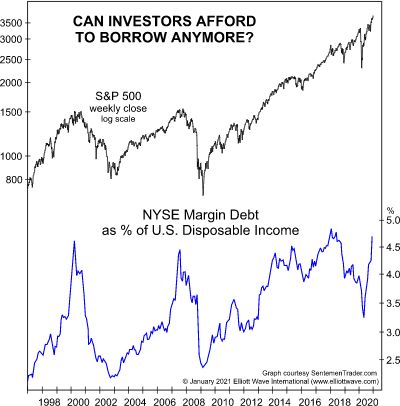 Margin debt as a percentage of disposable income is near a record. The most recent data point of 4.7% is higher than at the 2007 stock market peak and close to its level near the 2000 market top. With employment and economic conditions far more precarious now than at either of those prior peaks, margin calls will likely be far more disruptive than during either of the prior bear markets that followed.

You’ll also learn how the frenzy to use borrowed money to buy stocks ties in with Elliott wave analysis.

Right now, you can read the January Financial Forecast issue FREE inside the State of the U.S. Markets FreePass event.

Follow the link to see everything that’s included and join now: State of the U.S. Markets FreePass.