Is a bear market already underway in the U.S.?

Only time will tell for sure. What is known is that the Dow Industrials and S&P 500 index topped in January and the NASDAQ registered a peak back in November.

Of course, it’s possible that all three indexes could roar back, but if a bear market is underway, equity mutual funds are ill-positioned.

The April Elliott Wave Financial Forecast, a monthly publication which provides analysis of major U.S. financial markets, explains why with this chart and commentary: 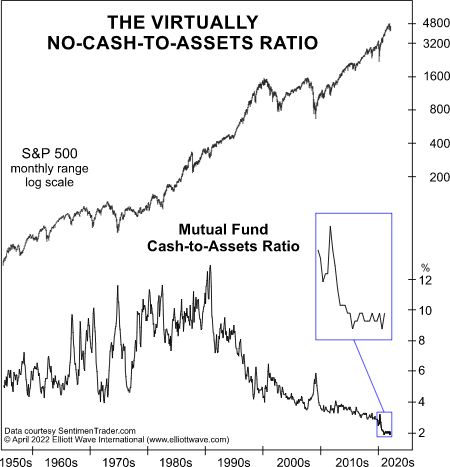 By historical standards, equity mutual fund managers hold record low levels of cash relative to their total assets. In December, the ratio fell to 1.9%, matching the … lowest [reading] on record. The latest reading, 2.1% in January, is lower than all but nine monthly readings since the mid-1950s.

So, equity mutual funds were nearly fully invested in the stock market around the time of the January peaks in the Dow and S&P 500 index.

Historically, this is not surprising, as this chart and commentary from Robert Prechter’s landmark book, The Socionomic Theory of Finance, reveal: 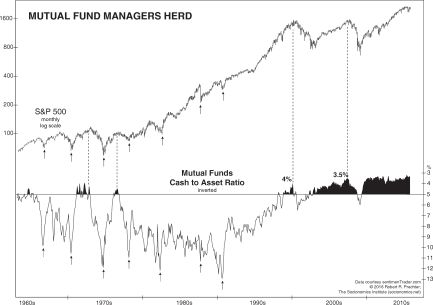 It is widely known that professional money managers, in the aggregate, fail to beat the market. The result is not, as some theorists say, because the market moves randomly. It is because most professionals are herding, right along with other speculators. [The chart shows] that at good prices for buying stock, mutual fund managers have high levels of cash, and at good prices for selling, they have low levels of cash.

The cash percentage of equity mutual funds is just one indicator to consider.

The primary factor that our analysts study is the stock market’s Elliott wave structure.

If you’re unfamiliar with Elliott wave analysis, you are encouraged to read Frost & Prechter’s definitive text on the subject: Elliott Wave Principle: Key to Market Behavior.

What the Wave Principle provides is a means of first limiting the possibilities and then ordering the relative probabilities of possible future market paths. Elliott’s highly specific rules reduce the number of valid alternatives to a minimum. Among those, the best interpretation, sometimes called the “preferred count,” is the one that satisfies the largest number of guidelines. Other interpretations are ordered accordingly. As a result, competent analysts applying the rules and guidelines of the Wave Principle objectively should usually agree on both the list of possibilities and the order of probabilities for various possible outcomes at any particular time. That order can usually be stated with certainty. Do not assume, however, that certainty about the order of probabilities is the same as certainty about one specific outcome. Under only the rarest of circumstances do you ever know exactly what the market is going to do. You must understand and accept that even an approach that can identify high odds for a fairly specific event must be wrong some of the time.

Learn about the “highly specific rules” of the Wave Principle by reading the entire online version of the book for free.

Club EWI is the world’s largest Elliott wave educational community and is free to join. Once you become a member, you’ll have complimentary access — not only to Elliott Wave Principle: Key to Market Behavior — but a lot of other Elliott wave resources on financial markets and investing. New educational resources (videos, articles, etc.) are periodically added, so you can always look forward to fresh financial insights. All the while, there are no obligations whatsoever — and, again, it’s all free after a quick and simple Club EWI membership signup (there are roughly 500,000 Club EWI members worldwide).