It has been years since the great recession, but unemployment remains stubbornly high. Europe is struggling with the debt problems of it’s members and the debt problem of the US is in check by strong demand to US dollar despite Bernanke’s printing press. But is a bull market ahead of us despite all of our economic woes? Or is the case that tens of billions of retirement dollars are at significant risk. Is now the time to gamble with retirement?

But many are down two strikes already, due to their previous big bets with hedge funds.

….the [pension] funds with a third to more than half of their money in private equity, hedge funds and real estate had returns that were more than a percentage point lower than returns of the funds that largely avoided those assets. They also paid nearly four times as much in fees.

The same article describes how other pension funds have embraced this risky strategy, and how funds generally have their assets at risk. In 2007 pension funds allocated 10.7 percent to “high-growth” investments; by September 2011 they had increased that bet to 19 percent. All the while, hedge funds have underperformed, as this chart from our January 2012 Financial Forecast shows: 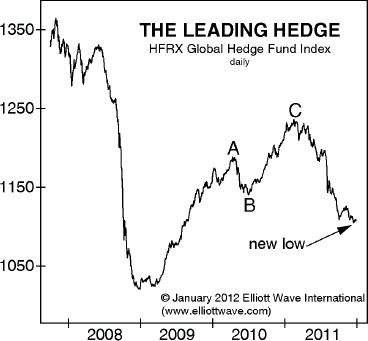 The [HFRX Global Hedge Fund Index] hit a new low on December 14, producing a rash of articles about how hedge funds got tripped up in 2011. “Many hedge-fund managers who came into 2011 riding a wave of momentum ended the year scratching their heads and nursing losses, whipsawed by markets that seemed to punish them month after month.” “Head scratching” is just right for this still-early stage of the bear. Through the first ten months of 2011, 123 Asian hedge funds shut their doors, the second highest number of closures since 2008, the year world markets collapsed.

The California Public Employees’ Retirement System (CalPERS) is the nation’s largest public pension fund. It recently lowered its investment return target from 7.75 percent to 7.5 percent. The system’s actuary had recommended lowering it to 7.25 percent.>

The CalPERS board members were told by their staff that they had only a 50 percent chance of hitting or surpassing the 7.5 percent target, yet they adopted that assumption. Others say the odds are even worse than that.

If CalPERS loses the bet, as it is likely to, the next generation will pay the shortfall…

….if CalPERS or any other public-pension system banks on higher-investment returns, it must take greater risks to meet the target…Cal-PERS chief investment officer told Pensions and Investments newspaper last year, his system has “a reasonably ambitious return target” and “needs to have a portfolio with a lot of growth exposure.”

Is now the time to take greater risks? You saw the 2011 performance of hedge funds, and that was a year when the DJIA was up. Imagine the scenario if the market takes a serious tumble.

This article was syndicated by Elliott Wave International and was originally published under the headline Public Pension Funds: Tens of Billions at Significant Risk. EWI is the world’s largest market forecasting firm. Its staff of full-time analysts led by Chartered Market Technician Robert Prechter provides 24-hour-a-day market analysis to institutional and private investors around the world.