FED is printing money. They call it “Quantitative Easing” aka QE1, QE2 and so on. Many economists think this expansion of FED balance sheet will create inflation in the near future. But they were saying that back in 2009 too. And two years later we still do not have the promised inflation. Base money supply expanded from 800 billion to almost 3 trillion. Yet we have outright deflation in some sectors such as housing. Yes Oil, Food and other commodities are up, but that seems to be due to demand/supply problems, not a shift in the purchasing power of the currency. US dollar is still at the same bottom levels that it was before the financial crash. So, why is the US dollar not in a free fall?

While long terms rates are rising, Treasury bill rates are stuck near zero. How is that possible?

During hyperinflation, rates typically rise to double digits per month. Inflationists find it difficult to reconcile the Fed’s massive balance sheet growth over three years beginning in August 2008 with short term rates at zero and long term rates only in the 2-5% range.

Deflationists (that is us) understand why investors are willing to hold government paper at such low returns:  The total supply of debt is contracting. Most bonds won’t survive. The federal government’s bonds will survive the longest.

Figure 10 shows that the total supply of “money” plus debt (all of which is in fact debt) peaked in 2008. This decline in overall money and credit is the first on an annual basis since 1929-1933. It is a big deal. 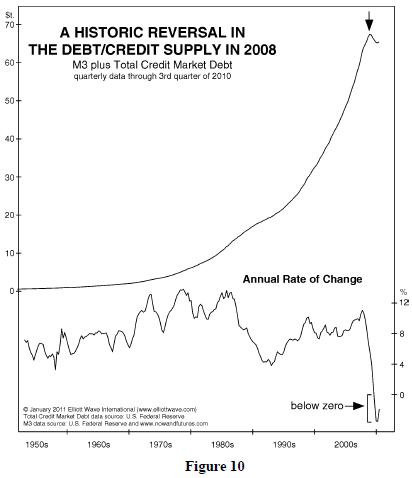 The Fed’s QE programs are failing to re-ignite inflation. By mid-2011, the Fed will have monetized just over $2 trillion worth of debt since 2008 to bring the value of its total assets to about $3t. This does represent a huge amount of fiat money. But the overall debt load is $65 trillion. Thus, the Fed will have monetized only 5% of the total, meaning that 95% of the outstanding debt is still suffocating the economy like a giant pool of sludge. …The Fed’s degree of monetization in light of these debts is very small.

For more of Robert Prechter’s insights on the markets, including why QE2 was a major tactical error, why rising oil prices are not bearish for stock, and why earnings don’t drive stock prices, read the rest of this Download your FREE 51-page Independent Investor eBook NOW.

2 thoughts on “Quantitative Easing and Inflation”