The Economist magazine, propaganda tool of the Globalist elite has a dark prediction for 2019. The cover is full black. There are speculations about what it really means. Is it the coming world war? Is it a financial crash? If yes, it is probably not a recession, but a depression that rivals Great Depression if it is big enough for a special cover on the economist.

Meanwhile, first the emerging markets, and then the US stocks broke down their rising wedge in traditional pattern and declining as one would expect once the upward trend line is broken.

The K wave is a 60 year cycle (+/- a year or so) with internal phases that are sometimes characterized as seasons: spring, summer, autumn and winter:

Kontratieff Winter phase probably started in 2008. However it doesn’t look like it has ended yet. We may actually be in the middle of a 20 year period of Winter highlighted by deflationary pressures as excessive money printing did not register as inflation and US dollar kept its value.

If this is the case, and if we are headed into a deflationary depression, why is the FED sucking the dollars out of the economy with QT instead of launching yet another QE?

Conquer the Crash is a must read to prepare yourself for challenging times.

There is a slow motion world war that is happening between the Neocon America and the Globalist elite. This struggle is felt in the United States with endless scandals trying to topple Trump’s government and is actually observed as wars in the Middle East. Does The Economist imply this may blow out into a full worldwide conflict soon?

Trump withdrew from the Iran Nuclear deal and is trying to enforce economic sanctions on Iran. However, unlike the earlier sanctions, this time, most of the traditional US allies side with Iran. Why is that?

China, and her masters, are worried that the US navy may block trade in the Oceans. To be freed from the US threat, they needed an alternative.

Back in September 2013, the Silk Road Economic Belt concept was introduced by Chinese President Xi Jinping during his visit to Kazakhstan. In a speech delivered at Nazarbayev University, Xi suggested that China and Central Asia cooperate to build a Silk Road Economic Belt. It was the first time the Chinese leadership mentioned the strategic vision.

This is not a Chinese vision. This is a globalist plan. The ruling elite who built the USA also built the China. Now they want to build the rest of the world, and own it too.

Western world has reached the limits of excessive debt in Europe, in USA, and in Japan. That is most of the developed world. To sell the American 401k, they need a buyer. For this reason, the globalist plan is to rise the rest of the world and rotate this debt.

Pentagon and the Neocon US wants to carry 20th century US supremacy into the 21st century, by force if necessary. Their answer to the American debt problem is to print money while the rest of the world has to work to earn dollars.

For the Pentagon plan to work, OPEC must continue to sell oil in dollars. A year ago a non violent coup replaced the Saudi princes to bring Salman to power. This is because Saudi Arabia was contemplating the IPO of Aramco (The Saudi oil company) in China instead of NY. The Chinese suggested the Saudis could sell oil in Yuan and they could in turn buy gold with that Yuan, essentially tying the Chinese currency to Gold, implying a stronger commitment against inflation compared to the US dollar. In other words, as long as China had the gold reserves, unlike the US plan, China would make sure Saudis got paid in real currency. For this reason, Pentagon decided Saudi Arabia needed new leadership.

As seen on the map, the Silk Road passes through Iran, Turkey and connects Europe with China. This is why globalist Obama signed a deal with Iran and Trump ended it. In case it is not obvious to the reader, we should note that Silk Road essentially enables Iran and Turkey control a substantial portion of the world trade. This is a threat to the US hegemony around the world.

Before the age of discovery, ancient empires, the Romans, Arabs and Ottomans controlled the world trade via the control of Middle East. Discovery of Oceanic trade routes ended the glory of the last Middle East empire, the Ottomans. China and India missed the industrial revolution. This allowed the Western World to take a lead and it made America the next Ocean Empire after Britain.

Now the changing tide once again threatens to end one empire and promises to rise another. China is back. India is coming up. The world is going back to the old normal. The flourishing trade will soon demand that the next Ottoman Empire move into the world stage.

The Pentagon does not want to lose control of the world trade. This is why Congress is debating whether the US should give F-35 to Turkey which they have already paid for and building parts of it. For this reason they are at odds with the Iranian government. For this reason, the US backs the Kurds in Middle East because that is the last foothold left to counter the threat of the Silk Road. The Pentagon plan to is create civil wars in Turkey and in Iran. That would be sufficient to block free trade on land and force it back into the Oceans. Note that Russian route is not economical since from China to Berlin there is no customer to make it worthwhile.

Ultimate US success would be to create a puppet Kurdish state in Eastern Turkey and Western Iran reaching to the Mediterranean to cut Europe from energy and trade routes. Turkey has intervened in Syria and blocked the Kurdish/USA march to the sea. Erdogan wants the US to leave Northern Syria. Few months ago he said “If the US does not leave Syria, we will bury them in Syria. We are a global power. Nobody can stop us.” That is not Turkey talking. Here is a peek at the leaders who report to the globalist rulers of the world:

You could add the Chinese Emperor to that photo, too. That is the visible face of the global power that is backing the Silk Road against the Neocon United states. Behind them is a bridge that connects Asia to Europe in Istanbul, literally the Silk Road.

Jamal Khashoggi murder is not an isolated incident. He needed divorce papers. He was routed to the Saudi consulate in Istanbul even though his ex-wife was not Turkish. The plan was to make him disappear and accuse the Turks. Khashoggi was writing in the globalist Washington Post against the current Saudi government. He had ties to the previous ruling group. He was about to write about Saudis using Chemical weapons in Yemen. That would implicate the USA. Turks knew about the plan. Probably they let it play out. Now they are going to use this to demand Salman’s head and restore the previous Saudi leadership. If it happens, the US may lose control of energy resources in the Middle East and it may be impossible to stop the Silk Road and sustain Petrodollar.

This sets the stage for further escalation around the world.

Trump says the FED should not increase the interest rates. But he should know that this is how the owners of the money supply gain control of the world. By expanding and then by contracting the money supply, they can pick and chose winners and losers. Their chosen loser is Trump. In order to topple Trump, they will let the recession and maybe depression take its toll. According to the globalist plan, this should happen before Trump gets re-elected.

For these reasons, the worst of Kondratieff Winter may be ahead of us.

Are We on the Brink of Global War?

Discover the Elliott Wave Principle’s answer in this powerful excerpt from the just-released book, Socionomic Causality in Politics.

Negative mood trends unfold in down-up-down (A-B-C) Elliott wave patterns. Within such patterns, the first and second downtrends (A and C) produce very different types of social actions. Second declines tend to coincide with major wars. That is not the case with first declines, when wars are typically absent or comparatively mild.

In Chapter 16 of The Wave Principle of Human Social Behavior, Robert Prechter hypothesized why this is the case:

Apparently society handles the first retrenchment in social mood, no matter how severe. “A” waves surprise optimistic people, who are unprepared and unwilling to wage war. It is the second drop that makes a sufficient number of increasingly stressed people angry enough to attack others militarily.

As you can see in Figure 1, none of the initial declines illustrated produced major wars.

First declines, however, still bring plenty of risks. The initial declines of 1720-1723, 1835-1842 and 1930-1932, which kicked off the largest-degree negative mood trends of the past three centuries, all began with intense deflation. The initial decline of 2000-2003 featured the 9/11 attacks and led to the relatively mild Iraq War. The initial wave down in the next period of negative social mood should likewise spark deflation and conflict, although not global war. 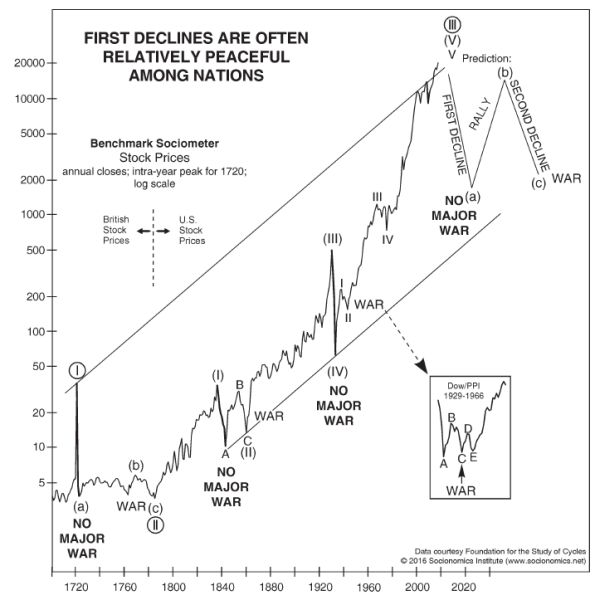 Suppose YOU had a single framework that allowed you to understand why certain candidates win elections and why nations go to war. And why a country’s internal politics can be peaceful one minute and beset with strikes, protests and terrorism the next. Such is the value of Socionomic Causality in Politics. In a paradigm-shifting work, Robert Prechter, Alan Hall and fellow contributors unveil why politics frequently confound even the most brilliant pollsters, historians, politicians, social scientists and the media—and how you can understand and sometimes even anticipate political changes with one simple shift in your perspective.

Conquer the Crash is a must read to prepare yourself for challenging times.

Interested in learning more? Read these
related articles from the Socionomics
Institute:

– Is the Fog of War Also the Fog of Negative Mood?
– The Mexican Drug War: A Bloody Consequence of Positive Social Mood