Interest Rates: The Warning That Few Wanted to Heed
Here’s an update on this “hugely dangerous bet”

Back in mid-2020, a common sentiment toward interest rates was that they would stay historically low for the foreseeable future.

Indeed, in July of that year, no less than the Bank of Canada governor said (BNN Bloomberg):

‘Interest rates will be low for a long time’: Macklem

In the same month and year, one chief investment officer also used the word “forever” in regard to low rates by saying, “We are moving from low for longer to low forever.”

The reason the mainstream was SO convinced was simple: 2020 was the first year of the pandemic, and it was widely believed that low rates would have to stay “forever” to “stimulate the economy.”

So, the July 2020 Elliott Wave Financial Forecast, a monthly publication which offers analysis of major U.S. financial markets, was going squarely against the prevailing sentiment toward interest rates when it showed this chart and said: 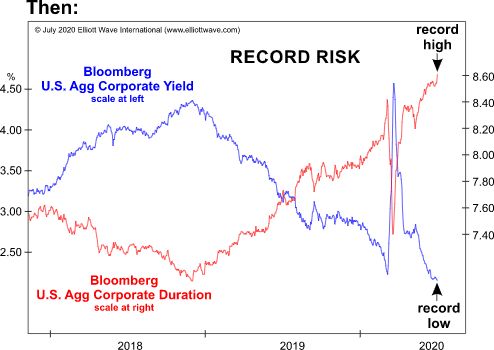 Fast forward to the April 2022 Elliott Wave Financial Forecast. Here’s a chart which shows you what has happened since that July 2020 analysis: 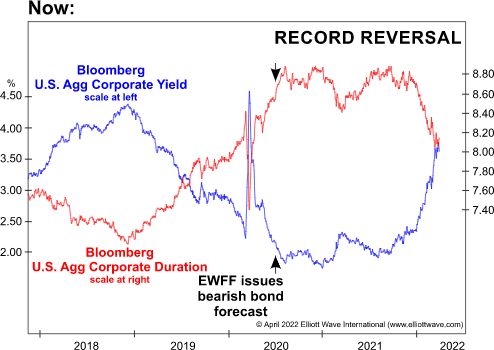 The chart updates both corporate yields and corporate durations. Corporate yields declined slightly further, to an all-time low at 1.74% on December 31, 2020, but they have since surged to 3.76%, more than doubling.

So much for the “low forever” sentiment.

And, relatedly, on May 2, a CNBC headline noted:

And, given the Fed has historically followed the market, another CNBC headline — this one from May 4 — is not surprising:

Now is the time to learn what Elliott wave analysis reveals about what to expect next for bond yields (or interest rates).

If you’re new to Elliott wave analysis, or need to freshen up on your knowledge, the ideal book to read is Frost & Prechter’s Elliott Wave Principle: Key to Market Behavior.

Here’s the good news: You can access the online version of the book for free once you become a Club EWI member.