Looking back on 2022, one of the biggest fears about oil was that prices would skyrocket even more than they did due to a disruption in supply from Russia.

Of course, Russia has been a major world supplier of oil, but after Russia invaded Ukraine, many global financial institutions refused to back transactions involving Russian oil.

So, back in March of 2022, we had this headline from a major financial website (CNBC, March 4):

Conventional wisdom says that a disruption in supply, let alone the biggest in decades, would lead to soaring oil prices.

However, at the time that March headline published, NYMEX crude oil was trading around $115 a barrel — and prices have been in a downtrend for most of the time since, for almost a year now.

In December, even the New York Times had a hard time explaining the disconnect (Dec. 9):

So, what’s going on?

Well, Elliott Wave International has studied the historic price patterns of oil and has concluded that investors cannot count on a relationship between prices and the oil market’s “fundamentals.” 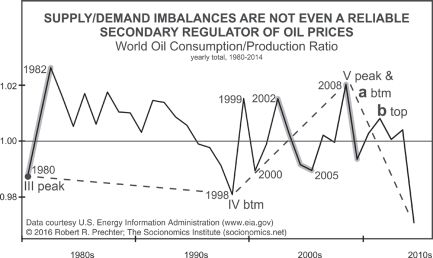 What Elliott Wave International has observed is that oil’s price does tend to follow Elliott wave patterns. As you probably know, Elliott waves reflect the repetitive patterns of investor psychology, the primary driver of financial markets.

Crude should be at the forefront of a … decline.

Indeed, as of this intraday writing on Jan. 9, NYMEX crude oil is trading lower than it was when the December Global Market Perspective published.

Now, the new January Global Market Perspective offers more insight into what you can expect for oil’s future price path.

And, speaking of the Elliott wave model, if you’re new to the subject, or simply need a refresher, read Frost & Prechter’s Elliott Wave Principle: Key to Market Behavior. Here’s a quote:

Dozens of markets around the globe are ending Elliott wave patterns right now. When they turn, they will make headlines.

And can change fortunes.

You can be ahead of that news — ready, waiting and well-positioned. EWI’s free State of the Global Markets event will get you ready.

Starting on January 16, and every two days, you’ll get a section of the latest issue of EWI’s Global Market Perspective.

At the end, you’ll have the entire January 2023 Global Market Perspective. This will arm you with the wave patterns around the world that are about to reverse.

Don’t miss it. And don’t miss the edge it will give you. Follow the link to join in free below.