Most economists believe the Fed can prevent financial crises and depressions. [EWI’s analysts] disagree. Socionomic theory proposes that naturally fluctuating waves of social mood regulate financial optimism and the economy. They are unconscious and cannot be managed. [emphasis added]

In case you’re unfamiliar with socionomic theory, socionomics is the study of how society’s changes in mood motivate social actions in realms that include the economy, political preferences, financial markets, actions of peace and war, and the fads and fashions of popular culture. Robert Prechter began formulating socionomic theory in 1976.

Now, let’s get back to the point that the January Elliott Wave Theorist makes about “naturally fluctuating waves of social mood” being unmanageable. Realize that if people’s psychology shifts from expansive to cautious, there’s nothing financial authorities can do about it.

On March 23, after the start of the swift financial downturn, Marketwatch had this headline:

Ironically, on that very day, the stock market declined even further.

But, looking beyond the action of the market, you can also get a good idea about the “fluctuating waves of social mood” from this chart and commentary from our April Elliott Wave Financial Forecast: 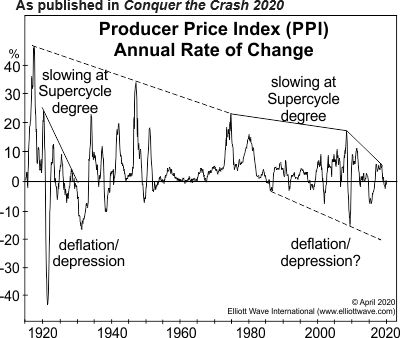 Changes in producer prices, a key deflationary indicator that tends to lead consumer prices, are already negative. The chart shows the persistent long-term slowing of U.S. producer prices on what Conquer the Crash maintains has been a steadily waxing precursor to deflation and depression. Noting PPI’s movement back and forth across the zero line, CTC observed that “economists have had difficulty explaining why producer prices have been so sluggish. The short answer is that deflationary psychology is creeping toward gaining the upper hand, no matter what the Fed does.”

It’s evident that a deflationary psychology is taking hold globally.

The closest that the world has come to deflation in modern times was the 2007-2009 financial crisis. However, the last full-blown deflationary episode was in the early 1930s. As you know, this period is known as the “Great Depression.”

Robert Prechter’s book, Conquer the Crash, explains why deflation, which is a decrease in the total amount of money and credit, goes together with a depression:

Deflation and depressions are rare.

Yet, the swift downturn in global financial markets strongly suggests that this is a time to prepare for the next ones.

With that in mind, Elliott Wave International has prepared a free report titled “What You Need to Know Now About Protecting Yourself from Deflation”, which you can access free when you join Club EWI. Membership in Club EWI is also 100% free.

This article was syndicated by Elliott Wave International and was originally published under the headline Deflationary Psychology Versus the Fed: Here’s the Likely Winner. EWI is the world’s largest market forecasting firm. Its staff of full-time analysts led by Chartered Market Technician Robert Prechter provides 24-hour-a-day market analysis to institutional and private investors around the world.