The relative value of cash will necessarily zoom higher when stocks plunge.

A negative sentiment toward cash had been in place for quite some time.

Let’s go back a little more than a year when our Feb. 2019 Elliott Wave Theorist showed this chart and said: 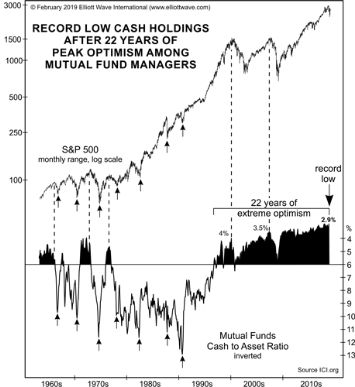 The average cash holding in mutual funds just fell to an all-time low. All long term sentiment indicators look like [this], except for the ones that look even worse.

These headlines published later in 2019:

These dismissive views toward cash are what to expect after a historically long uptrend in stocks. Many investors expected equity prices to keep climbing, so why hold cash?

Indeed, as recently as January, one highly prominent professional investor reverted back to the old saying, “Cash is trash.”

However, in the same month, our Elliott Wave Financial Forecast said:

Cash is the only answer to survival in the coming environment.

The just-published April Elliott Wave Financial Forecast followed up with this chart and said:

Equities are the opposite of cash; risk-assets that require the surrender of cash. The relative value of cash will necessarily zoom higher when stocks plunge. The chart inverts the Dow’s recent plunge to show the liftoff for a new bull market in cash. … As [the book] Conquer the Crash stated: “When the stock market reaches bottom, you can buy incredibly cheap shares that almost no one else can afford because they lost it all when their stocks collapsed.”

Speaking of a stock market bottom, are we almost there?

Well, as recently as March 28 (Marketwatch), a major financial website sported this sub-headline:

Coronavirus crash is a buying opportunity for focused, long-term investors

The evidence of an entrenched and even surging public infatuation with shares is not simply anecdotal. A Bankrate survey of about 2500 U.S. consumers from March 20 through March 24 found that just 11% have taken investments out of the marker in first quarter of 2020, while 13% “added more investments over the last three months.” Another 66% of respondents said “they intentionally left their holdings as is.” Ten percent said “they were unaware of the current economic volatility.” So, buyers or holders of equities accounted for almost 90% of investors through the worst first quarter in the 124-year history of the Dow Jones Industrial Average. Remarkably, 47% said they cut spending over “concerns of the economy.” Just 15% said they did so because of “concerns over the stock market.”

However, Elliott wave analysis of the stock market’s price pattern suggests that many investors will soon wish they had embraced cash instead of stocks.

Now is the time to learn all you can about the Elliott wave model so you can apply this knowledge to the current stock market picture and gain insights into what to expect next.

A great educational resource is the online version of the book, Elliott Wave Principle: Key to Market Behavior by Frost & Prechter, which you can access free when you join Club EWI. Membership in Club EWI is also 100% free.

This article was syndicated by Elliott Wave International and was originally published under the headline In Every Bear Market, One Asset Always Surges in Value — This One. EWI is the world’s largest market forecasting firm. Its staff of full-time analysts led by Chartered Market Technician Robert Prechter provides 24-hour-a-day market analysis to institutional and private investors around the world.