As you may know, short-selling a stock means that a speculator is betting that the price will go down.

This is a lot riskier than taking a “long” position in a stock — or, betting that the price will go up.

The reason why is that the most a speculator can lose by going long is 100% of his investment — say, if a company goes out of business. However, the losses a short-seller can suffer is potentially unlimited, in other words, short-sellers can lose way more than their initial investment.

As a case in point, a November 2015 Marketwatch article noted that …

… an investor placed a $37,000 short position on [a micro-cap pharmaceutical firm] earlier this month, only to find out a day later that the shares had shot up about 800%.

However, despite the high risk, there are speculators who elect to play the short side.

Recently, however, their ranks have been dramatically dwindling, given the strong stock market rally since the March low. 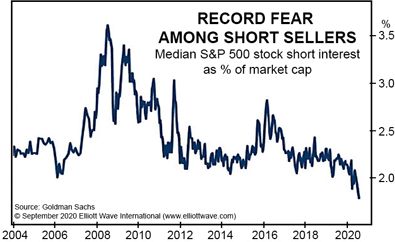 The story under the Bloomberg headline features Goldman Sachs’ data on the short interest in the median S&P 500 stock, which fell to just 1.8% of market capitalization in early August. As the chart shows, this is easily the lowest wager against rising S&P prices in the 16-year history of the data. “Skeptics are a dying breed in American equities,” concluded Bloomberg.

What should market participants make of this extraordinarily low short interest in stocks?

In other words, sentiment extremes often correlate with trend changes.

Having said that, it’s best to use sentiment measures in conjunction with the Elliott wave model.

When the two are sending the same message, an investor can arrive at a high-confidence market forecast.

If you’d like to get an in-depth understanding of the Elliott wave model, you are encouraged to read the book, Elliott Wave Principle: Key to Market Behavior, by Frost & Prechter.

Here’s a quote from the Wall Street classic:

In its broadest sense, the Wave Principle suggests the idea that the same law that shapes living creatures and galaxies is inherent in the spirit and activities of men en masse. Because the stock market is the most meticulously tabulated reflector of mass psychology in the world, its data produce an excellent recording of man’s social psychological states and trends. This record of the fluctuating self-evaluation of social man’s own productive enterprise makes manifest specific patterns of progress and regress. What the Wave Principle says is that mankind’s progress (of which the stock market is a popularly determined valuation) does not occur in a straight line, does not occur randomly, and does not occur cyclically. Rather, progress takes place in a “three steps forward, two steps back” fashion, a form that nature prefers. More grandly, as the activity of social man is linked to the Fibonacci sequence and the spiral pattern of progression, it is apparently no exception to the general law of ordered growth in the universe.

The online version of Elliott Wave Principle: Key to Market Behavior is available to you for free when you join Club EWI, an Elliott wave educational community with about 350,000 members. Club EWI membership allows you to freely access a wealth of Elliott wave resources on financial markets, investing and trading without any obligations.