If raising money doesn’t get any easier than this, what’s next?

The latest data from Refinitiv shows that companies have raised a record $140 billion in the U.S. dollar junk bond market during the first quarter of this year. That beats the previous record set during the second quarter last year when companies scrambled to issue debt in a bid to raise cash during the pandemic. The three biggest issuance quarters in history have been set in the past year. With investors falling over themselves to lend money to any venture offering a U.S. dollar yield above 4%, companies are now not only finding that they can raise money easily in order to roll over existing debt, but some are using the proceeds to pay dividends to owners. It’s beyond absurd.

When a mania is in full force, though, the vast majority of participants are blind to the absurdity. Investors, for instance, think that they must lend because 4% or higher is such a juicy yield when compared with anything else. And the central banks will not let companies fail, so it’s a free lunch.

This era of central bank-induced gushing liquidity, combined with a manic social mood, has created statistics that, when looked back on in the cold light of day, will be viewed as clearly insane. At this juncture, it is seen as entirely normal, indeed clever, to give your money to someone who will not tell you what they are going to do with it. The SPAC (Special Purpose Acquisition Company) mania is a prime candidate for the financial bubble history books.

And then, when we think we’ve seen it all, along come NFTs. Non-fungible tokens are the new hot, must-have accessory in town. According to Wikipedia, “a non-fungible token is a unit of data on a digital ledger called a blockchain, where each NFT can represent a unique digital item, and thus they are not interchangeable. NFTs can represent digital files such as art, audio, videos, items in video games and other forms of creative work.” Ah, life in the cloud.

But it doesn’t matter if anyone understands them. The crowd is besotted by them and that’s all there is to it. This week, a New York Times columnist sold his column as a non-fungible token for $560,000, writing “Why can’t a journalist join the NFT party, too?” 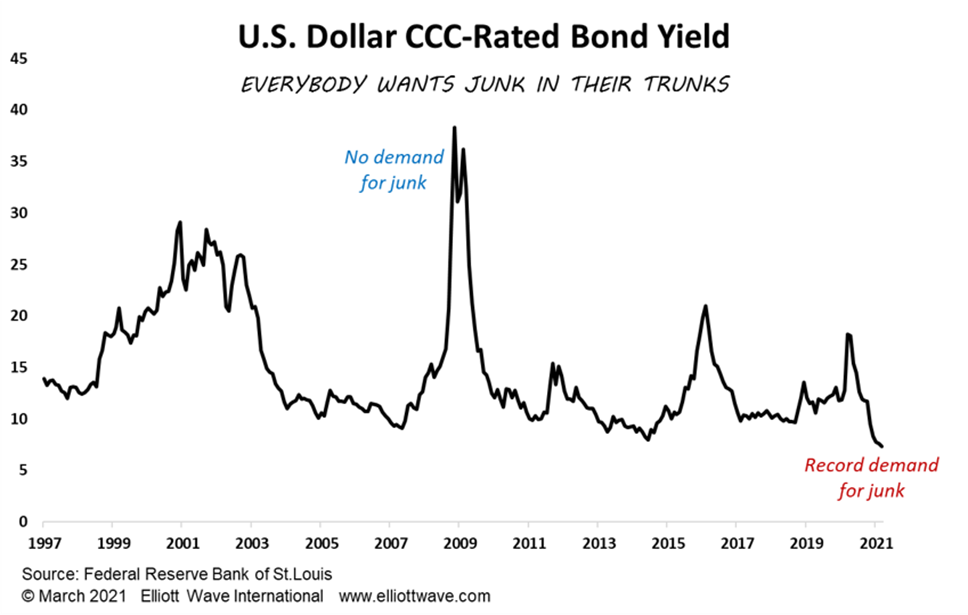 The free lunch party is in full swing. We say enjoy it while it lasts because the hangover is going to be biblical. If you need some religion, check out the free report, Money Making Rules for Investors. Get instant access with a free Club EWI membership.