Penny stocks are an investment vehicle that really has garnered the attention and speculation of investors in early 2021. They’re plunging headlong into off-exchange shares.

I remember back when I started in the early 1980s at Merrill Lynch, there was a guy that walked in the office and he had pieces of paper that were pink, and I didn’t know what they were.

I was 23 years old, just starting out. I went over to him and said, “What are you looking at?” And he turned to me and he said, “Son, this is your road to riches right here.” And then he was looking at the OTC bulletin board pink sheets of these off-penny stocks.

He was partly right, because when they fired him, about three months later, they wound up giving me his books. So it was my road to riches originally, but I didn’t quite understand what he was talking about.

Bulletin board or penny stocks are the most speculative shares you can get. They’re often the most liquid shares. They’re a hotbed of pump and dump stock manipulation schemes. And they’re an area best avoided by all investors. 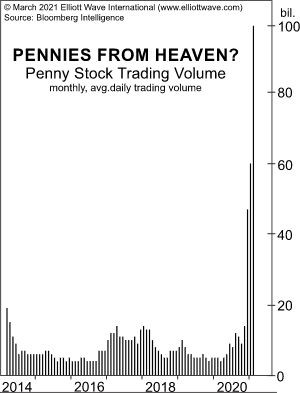 What you’re looking at here is the daily penny stock trading volume, which is well over a hundred billion by the middle of February. And by the end of February, it hit a total for the month of two trillion. This is an area of speculation that we see that investors are just throwing caution to the wind and going full steam ahead into the market.

This article is excerpted from a video presentation done by Steven Hochberg, Chief Market Analyst at Elliott Wave International. The full 25-minute video is of “aha” moments and charts that you won’t see anywhere else. Sign up for a FREE Club EWI account now to watch the full video.