8 Indicators in 1: Here’s the Message of the Panic/Euphoria Mode.
Prior model extremes occurred in March 2000 and October 2007.

Elliott Wave International has been providing market analysis for more than four decades — which includes many bull/bear market cycles.

That said, the public’s current market mindset — especially among inexperienced investors — is a reminder of the extremes surrounding the 2000 market top, and a few others.

Also, according to an early February Deutsche Bank survey of online brokerage users, 61% are under 34 years of age and 45% are in their first year of investing.

Younger, Savvier Investors Are Making Up a New Movement

So, all in all, there’s no shortage of financial optimism. 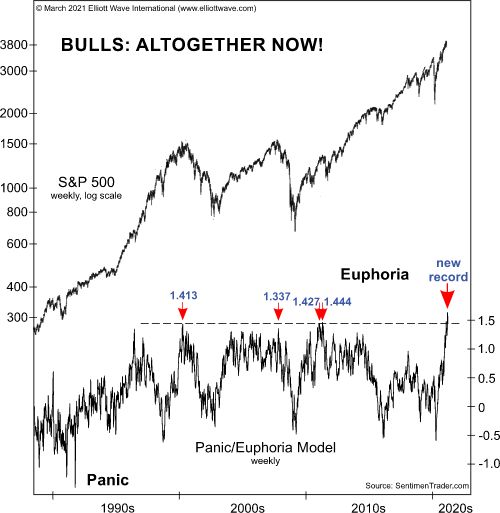 It’s important to know that this extreme in optimism ties in perfectly with what the Elliott wave model is conveying right now.

The beauty of the Elliott wave model is that it can help you to anticipate trend changes.

It is a thrilling experience to pinpoint a turn, and the Wave Principle is the only approach that can occasionally provide the opportunity to do so.

The ability to identify such junctures is remarkable enough, but the Wave Principle is the only method of analysis that also provides guidelines for forecasting.

All that’s required for free access to this Wall Street classic is a Club EWI membership — which is also free. Club EWI is the world’s largest Elliott wave educational community (approximately 350,000 worldwide members) and members get free access to a treasure trove of Elliott wave resources on financial markets, investing and trading.