“Fastest Jump Since 2007”: How Leveraged Investors are Courting “Doom”
“Our view is that the use of margin to buy stocks is far higher than the NYSE figures indicate”

The stock market uptrend has extended for more than 11 years.

Even so, instead of displaying caution, investors have been borrowing to buy stocks like there’s no such thing as a bear market.

For example, consider this chart and commentary from the March Elliott Wave Financial Forecast, a monthly publication which provides analysis of major U.S. financial markets: 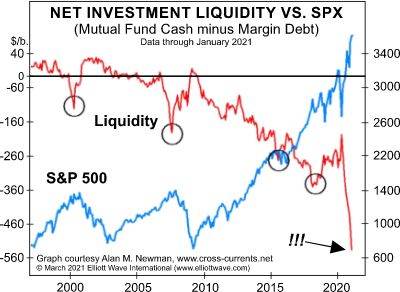 Alan M. Newman, editor of Crosscurrents (www.cross-currents.net), is a market veteran who has seen many bull and bear markets. He recently published this “startling” chart of what he calls Net Investment Liquidity, in which he subtracts total U.S. mutual fund cash from total New York Stock Exchange margin debt. [Newman said]: “We’ve seen a lot in 56 years of observation and this appears to be the riskiest environment in my lifetime.”

Margin debt as a percentage of U.S. disposable personal income hit 4.6% in February, well above the extremes of approximately 4% in 2000 and 2007. With “lopsided commitments” to leveraged long funds and all kinds of other arcane financial instruments, our view is that the use of margin to buy stocks is far higher than the NYSE figures indicate.

Margin debt saw an annual surge of 49% in February, which was the fastest jump since 2007. …

Leverage is a double-edged sword for investors, as many take on the debt to buy more stocks. That is a winning strategy in a bull market, but a market correction can spell doom for investors who have too much leverage and need to sell equities or deposit more cash to meet margin calls, which can further exacerbate a downturn in stocks.

Indeed, the Elliott wave model suggests that the U.S. stock market is at an important juncture.

The primary value of the Wave Principle is that it provides a context for market analysis. This context provides both a basis for disciplined thinking and a perspective on the market’s general position and outlook. At times, its accuracy in identifying, and even anticipating, changes in direction is almost unbelievable.