As early as 2011, our analysis warned that Europe’s deflation was coming — here’s why
For the economies of Europe, the past few months have felt like one long ice-bucket challenge that never ends: A perpetual state of shock induced by the bone-chilling fact thatdeflation

“…has become a reality in many European countries.” (Oct. 24, New York Times)

At last count, eight European nations are now in outright deflation, including:

And no, in case you were wondering, it’s not the warm and fuzzy kind of “good deflation” being touted here in the United States, where the only consequence is lower prices. In Europe, it’s the

So, we ask you: What could possibly be scarier than deflation? How about — not even being able to foresee it?

Yes, deflation was a surprise to the financial authorities. Says one Oct. 12 financial blog post:

“It seems the entire world is cooling off in ways most political leaders and central bankers never saw coming. Global finance ministers are now up against a beast none have known in their professional lives.”

That’s what should keep adults like you and me up all night — the “never-saw-it-coming” part. Just how safe is our future if the people whose job it is to keep the world’s economies stable lack the tools to predict one of the most dangerous economic conditions?

This recent lack of foresight jives with what former Federal Reserve chairman Alan “The Maestro” Greenspan said in 2008:

“We can tell a bubble only after it burst.”

It also jives with what some big wig at the Organization for Economic Co-operation & Development said in 2012:

“The responsibility of the ‘latest’ financial crisis, which no one saw coming, should be borne by all of us.”

But the fact is — there was — and is — a way to see these deflationary economic sea changes coming.

This chart of the UK Consumer Price Index is a reliable bellwether for inflation in Europe. You can see that price expansion peaked in September 2011 at 5.2%: 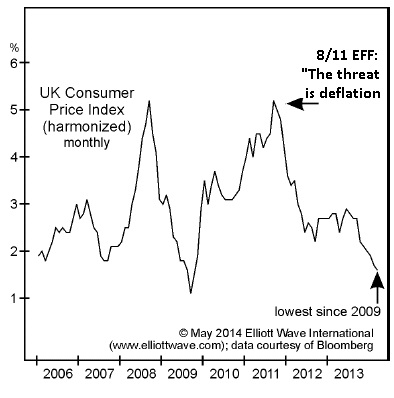 At the time, the “D” word was completely off the mainstream radar. Soaring oil, grain, and commodity prices, alongside a stimulus-happy European Central Bank fueled widespread fears of runaway inflation.

“We maintain our stance, however, that the looming threat is not inflation but deflation. Far from a sense of relief, the Banks’ paramount feelings should soon develop into an unrelenting dread.”

Here’s what made us take a contrarian stance (among many other reasons):

[In the August 2011 issue,] for instance, we showed a chart of eurozone manufacturing production and British GDP growth. Both were falling, not rising, indicating Europe’s likely return to economic contraction.

[This] chart is another key piece of deflationary evidence… It shows the relentless downward trajectory of Swiss, German and British 10-year bond yields, which is one of the thorniest problems for those who take the inflationist worldview. 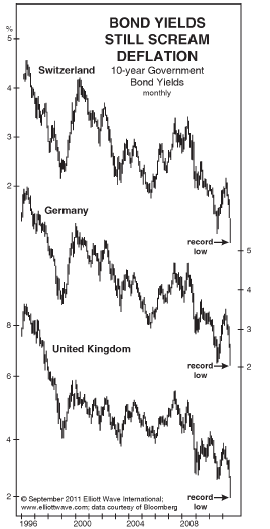 However, the widespread call for inflation only continued to intensify in the mainstream finance. In fact, in February 2012, when the U.K. producer price inflation came in higher than expected, it prompted this word of advice from economists:

“PPI: Another wake-up call for apoplithorismosphobes, the clinical term for those who fear deflation. We recommend that sufferers ‘seek therapy.‘” (March 12, Wall Street Journal)

Yet, our July 2012 European Financial Forecast remained committed to its counter claim:

“Our models say that inflation rates will keep failing until they’re again measuring the rate of deflation as they last did briefly in 2009.”

So, it’s now 2014 and deflation in Europe is no longer a specter or a figment of an unbalanced imagination. Here’s a comment from the September 2014 European Financial Forecast:

“The central bank’s latest deflation-fighting contrivance is a €400 billion package of targeted LTRO loans, which are designed to compel banks to lend to ordinary business owners… The ECB has slashed its main refinancing rate to 0.15% and now charges for banks’ overnight deposits. The result? Shown below, Europe’s largest economy, Germany, just contracted 0.2%; French economic output has ground to a halt; and Italy just entered its third recession since 2008.” 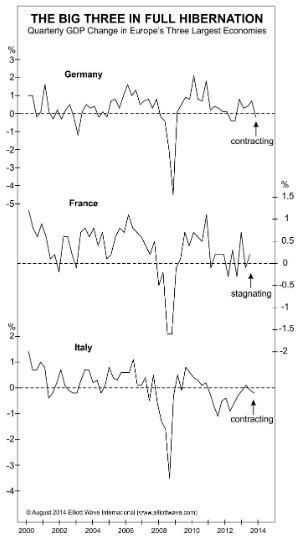 Now that deflation in Europe is a reality, the question is — will it get better? Is this just a temporary economic condition that will be soon replaced with another one — the condition that economists are much more familiar with, inflation?

We don’t think deflation will surrender quite so easily. Want to learn more about deflation before it could potentially affect your investments?

Today, we invite you to read a free report from Elliott Wave International titled, What You Need to Know About Protecting Yourself from Deflation. This 10-page report will help you understand how you can better prepare yourself for its devastating effects.

Follow this link to get your free report – and start reading immediately!

One thought on “What is Scarier Than Deflation?”