When the market goes up, or when it goes down, the mainstream media often explains via events or earnings. But very often, the morning headline gets stale by the afternoon on the same day. In the morning it goes something like: XYZ earnings disappoint investors, stocks are crashing! Then by the afternoon they have to change the headline: Investors shrug off bad news. Stocks are soaring! Why does that happen? Is it not that news and earnings move stocks?

Want to Know the REAL Reason Why the Stock Market Turned Down?

The rout in stocks is no “jinx”
In case you’ve been roving Mars for the past month, you’ve missed quite a fiasco from the world’s leading stock market:

“Since it topped out last month, the Dow has suffered eight triple digit losses! Add it all up, and the Dow has slid about 7.5% percent from its peak, the biggest retreat in more than two years. It also means the Dow has now given back all of its gains for the year — and then some.” (Daily Finance Oct. 15)

Now, according to the mainstream experts, there are 3 key causes for the market’s sell-off:

On September 19, China’s e-commerce behemoth Alibaba Group launched its $25 billion initial public offering on the New York Stock Exchange — the largest I.P.O. ever in the history of all things, everywhere. An October 13 Bloomberg article calls the BABA reveal a giant, panda-sized sell signal and writes:

“The abundance of investor confidence needed to get Alibaba’s record $25 billion initial public offering off the ground was but one of several red flags that made the market feel top heavy.”

This logic sounds legit now. But back when Alibaba was going to market, the only red flag was the one taunting the wild bulls to charge. From the September 25 USA Today:

“Calling a top based on a big I.P.O. is probably the weakest argument the bears have made so far… While the market isn’t cheap, corporate earnings are still growing solidly, which should keep the bull alive.”

The next reason for the market’s sell-off is…

“A much bigger issue confronting the market is the spread of the Ebola virus. This is by definition, a situation with an unquantifiable outcome and that it would create market uncertainty should hardly be surprising.” (October 13 Bloomberg)

Again, this explanation doesn’t make sense, considering the fact that the Ebola crisis has been front and center in the news since the first outbreak was reported seven months ago — on March 19, 2014. The first 3 American victims of the virus were flown into the United States from Liberia in early August, to receive treatment at the Centers for Disease Control in Atlanta, Georgia.

Well, sort of. With no tangible trigger for the market’s sell-off, an October 15 news source sites an intangible one:

“It’s not unusual for the market to swing wildly in October… in what’s become known as the ‘Jinx Month.’” (Daily Finance)

Jinx, as in coming from the Greek word “iynx,” bird used in black magic.

At the end of the day, every single one of these efforts to explain the stock market rout occur after the fact — AFTER the Dow has already plummeted over 1000 points from its September 19 peak.

Prior to the market losing its footing, Elliott Wave International published an urgent Elliott Wave Theorist Interim Report. The date of publication: September 19, the day of the high. The report warned investors that the Dow had very good reason to kiss its all-time high goodbye:

“Our daily closing Dow projection of 17,280 was achieved today.”
“Our Flash service is short all three stock indexes.”
“Next week, the U.S. stock averages should decline.”

Once the market began to plummet, our October 10 Short Term Update showed subscribers 2 more objective technical reasons for the reversal.

“It’s now been one full year since October 9, 2013, the date that the Dow’s fifth-wave ending diagonal [Elliott wave pattern] started.”

An Elliott wave ending diagonal pattern is a 5-wave move usually occurring in wave 5. In all cases: 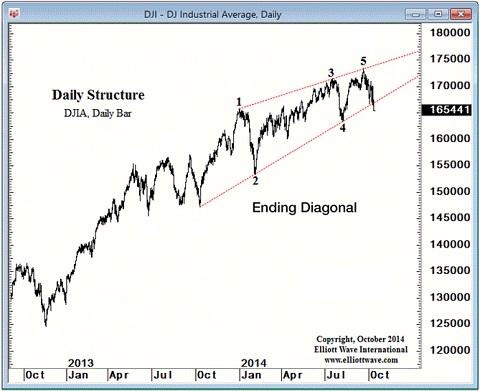 “October 9, 2013 marks the start of the trendline that would eventually form the baseline of the diagonal, as shown on the daily chart. The market is signaling that this line is valid and important, as there have been six separate touch points over the past year.

“We’ve often said that trendlines are a meaningful facet of market analysis because we don’t draw them, the market does. All we do is connect the points on the charts to show what the market thinks is significant.

“Today, for the first time in a year, the Dow closed below the trendline, providing another key piece of technical evidence that the wave structure of the prior advance is complete.”

The next chart shows you how the Dow did, indeed, fall below this very important trendline as Short Term Update forecast: 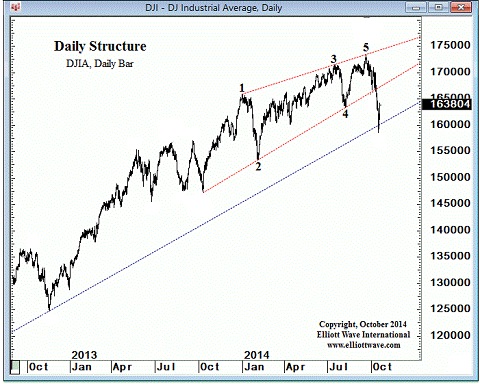 So, to summarize what you’ve just learned:

Fundamental analysis cites Alibaba, Ebola, and/or a magic “Jinx” as the cause(s) for the market sell-off — after the fact.

Elliott wave analysis cited an important Fibonacci price target, a mature Elliott wave pattern, and a meaningful trendline as the causes — in advance.

Moving forward, the choice of how you protect your financial future is yours.

One thought on “Why Did the Stock Market Go Down?”