Stocks Top When Everyone Feels Safe

Are the complacent investors heading for another cliff?
Steve Hochberg on the state of retail money market funds vs. stock market capitalization, filmed at the 2014 Las Vegas Money Show

Editor’s note: The article below is adapted from the transcript of the live presentation above, originally recorded at the 2014 Las Vegas Money Show. It features Elliott Wave International Chief Market Analyst Steve Hochberg. Hochberg is co-editor of The Elliott Wave Financial Forecast, one of EWI’s flasgship market letters. Click here for a free excerpt from Hochberg’s latest issue.

This chart is a picture of retail money market funds as a percentage of market capitalization.

In other words, when people are super bullish, they don’t want to hold any money in money market funds. They want to invest it, right?

Because why hold money aside when you don’t think the market’s going down, when it can be in the market if you think it’s going up?

When people are super bearish, what do they do? They take money out of the market, and they put it into money market funds hoping to wait out what they view as a declining market.

Now look at the upward spikes in this chart. 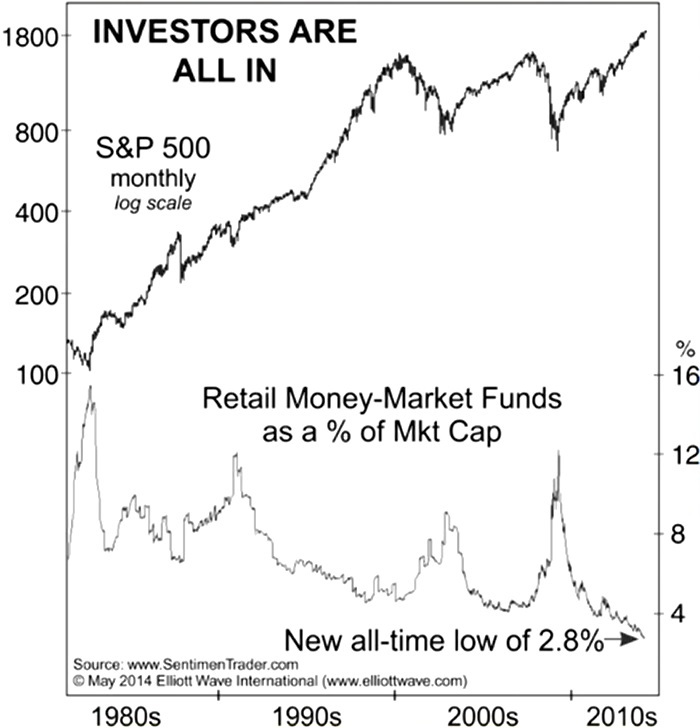 You can see that there was a high percentage of money in money market funds as a percentage of market cap back in 1982 as the market was bottoming and starting that great bull market.

We are now at a new all-time low in the percentage of retail money market funds relative of market cap at just 2.8%. In other words, people are fully invested.

Investors are so optimistic about the future, they see no reason to keep money in money market funds in case the market goes down.

This is a classic warning sign that a reversal is ahead. Have you made your logistic plans to pull out of the market on time? Remember: Stocks decline first, economic recession becomes apparent 6 months later which is usually too late to save your nest egg.