“Why Is the Stock Market Falling?” — (Not Because of These Reasons)

For example, on April 22, an intraday Marketwatch headline gave two reasons for that day’s plummeting prices:

Prices fell considerably further on April 22 after that headline published, however, the question is: Are the Fed and earnings the real reasons the stock market cratered?

Elliott Wave International’s extensive research reveals that the answer is likely “no.” The evidence is overwhelming that news — whether positive or negative — does not determine the market’s trend. (Besides, on any given day, the news is usually a mixed bag anyway. You can always find a bullish or bearish “reason” for stocks to go up or down. Mainstream market observers simply pick from that bag what fits the day’s price action.)

As cases in point, let’s review the Fed and earnings as supposed “causes” of stock market action, given these two factors were mentioned in that headline.

Let’s start with the Fed and a bit of history. The chart is from the March 2019 Elliott Wave Financial Forecast, a monthly publication which provides analysis of major U.S. financial markets. It shows the lack of correlation between Fed behavior and the stock market: 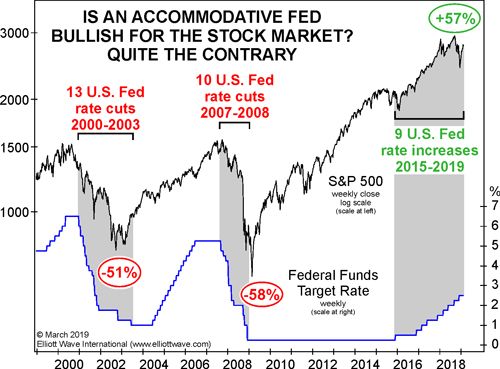 Regarding earnings, this chart is from the Dec. 2009 Elliott Wave Financial Forecast:

You’ll notice on the chart that in Q4 2008, the S&P 500 had its first negative earnings quarter ever. According to conventional logic, stocks should have crashed afterwards. Instead, a rally started in March 2009, which stretched all the way into early 2022.

So, you see why Elliott Wave International’s analysts do not look to the Fed, earnings — or any other factor outside of the market when formulating a stock market forecast.

Instead, they look to the market itself — which unfolds in repetitive price patterns, in accordance with the Elliott wave model.

Patterns in the indexes are at junctures where they should resume the decline from the November and January highs.

The Elliott wave model does not promise perfect forecasts, yet, in our view, it does reflect how financial markets really work.

You can learn the details of The Wave Principle by reading the online version of the book for free.

All that’s required for free access is a Club EWI membership. Club EWI is the world’s largest Elliott wave educational community and is free to join. Plus, members enjoy complimentary access to a wealth of Elliott wave resources on investing and trading without any obligation.