Most everyone knows that the housing market has been booming in the U.S.

However, if history is a guide, expect U.S. home prices to significantly decline.

As a case in point, after home sales fell by a more than expected 2.7% in October 2005, our December 2005 Elliott Wave Financial Forecast said:

The housing market is in the process of falling into an enormous crater.

Less than a year later, the U.S. housing market topped.

As you might imagine, our housing market analysis involves more than looking at home sales, yet it is a major indicator.

This March 25 Bloomberg headline reveals how this indicator is relevant now:

Specifically, pending home sales dropped by 4.1% in February. That’s in contrast with economist’s expectations, which was a 1% rise.

This is a non-confirmation of the price peak that we see now. Same happened back in 2006. The pending home sales peaked and started to decline, while the price peaked later. We may be seeing the same today.

The April Elliott Wave Financial Forecast, a monthly publication which offers analysis of major U.S. financial markets, provided its take with this chart and commentary: 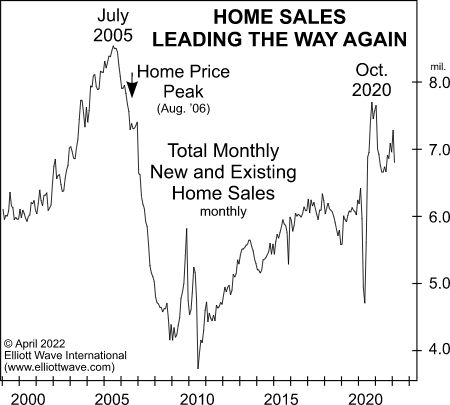 The arrow on the chart of new and existing U.S. home sales marks the August 2006 top for median home prices, which was $216,686. The span from the peak in sales in July 2005 to the peak in prices in August 2006 was 13 months. At this point, peak sales in new and existing homes occurred in October 2020, 17 months ago. After rebounding somewhat with the rally in stocks through the end of 2021, home sales fell “unexpectedly” in January and February. Pending homes sales, which tend to lead actual sales, have been weaker still.

The recent decline in home sales does not mean that home prices will follow the exact path as they did during the prior housing bust. However, this time-tested indicator is something to keep in mind.

With that in mind, the Elliott Wave Financial Forecast is keeping tabs on the Elliott wave structure of the stock market.

The primary value of the Wave Principle is that it provides a context for market analysis. This context provides both a basis for disciplined thinking and a perspective on the market’s general position and outlook. At times its accuracy in identifying, and even anticipating, changes in direction is almost unbelievable.

Here’s good news: You can access the entire online version of the book for free.

That’s right — all that’s required for free access to this Wall Street classic is a Club EWI membership, which is also free.