Elliott Wave: Market Signaling Fed to Cut Rates Soon
We have tracked the U.S. Federal Reserve’s interest rates decisions for years. Back in March 24th, we said FED follows the market lead. This week, the Fed once again decided to keep the funds rate unchanged. We expect the Fed to change course soon.

We have tracked the U.S. Federal Reserve’s interest rates decisions for years.

In December, we wrote an article titled “Interest Rates Win Again as Fed Follows the Market,” where we observed that although most pundits believe that central banks set interest rates, central banks actually follow the freely traded bond market in their rates decisions.

We noted that the December federal funds rate hike followed increases in the three-month and six-month U.S. Treasury bill yields set by the market.

In March, we pointed out that the Fed followed the market yet again. T-bill rates had gone sideways since November, and the Fed correspondingly kept the federal funds rate unchanged.

This week, the Fed once again decided to keep the funds rate unchanged. We expect the Fed to change course soon. The chart shows the fed funds rate (red line) and the yield on both 3-month and 6-month U.S. T-bills (yellow and green lines, respectively). The latter two rates are freely-traded, while the former rate is set by the Fed. Observe the growing gap between the yield on short-term T-bills and the present fed funds rate. The market is leading the Fed to lower its fed funds rate.

The same behavior occurred in 2007. By June 18, 2007, the 3-month U.S. T-bill yield had declined to 4.52% since trending sideways after the Fed raised the fed funds rate to 5.25% in June 2006. The market was leading the Fed to cut rates. The spread between the two became even wider, and at its September 2007 meeting, the Fed finally acquiesced to the market and lowered the funds rate from 5.25% to 4.75%. The Fed chased T-bill rates lower in a series of rate cuts all through 2008, finally dropping the fed funds rate to 0.25% in December 2008. Meanwhile, the DJIA declined more than 50% during the entire episode, highlighting the central bank’s impotence in controlling markets.

Based on current dynamics, the market is signaling that at some point in the coming months, the Fed will lower its Fed Funds rate to align with T-bill rates. We’ll be watching.

See Chapter 3 of The Socionomic Theory of Finance for more examples of central banks’ acquiescence to markets around the world.

This article was syndicated by Elliott Wave International and was originally published under the headline Elliott Wave: Market Signaling Fed to Cut Rates Soon. EWI is the world’s largest market forecasting firm. Its staff of full-time analysts led by Chartered Market Technician Robert Prechter provides 24-hour-a-day market analysis to institutional and private investors around the world. 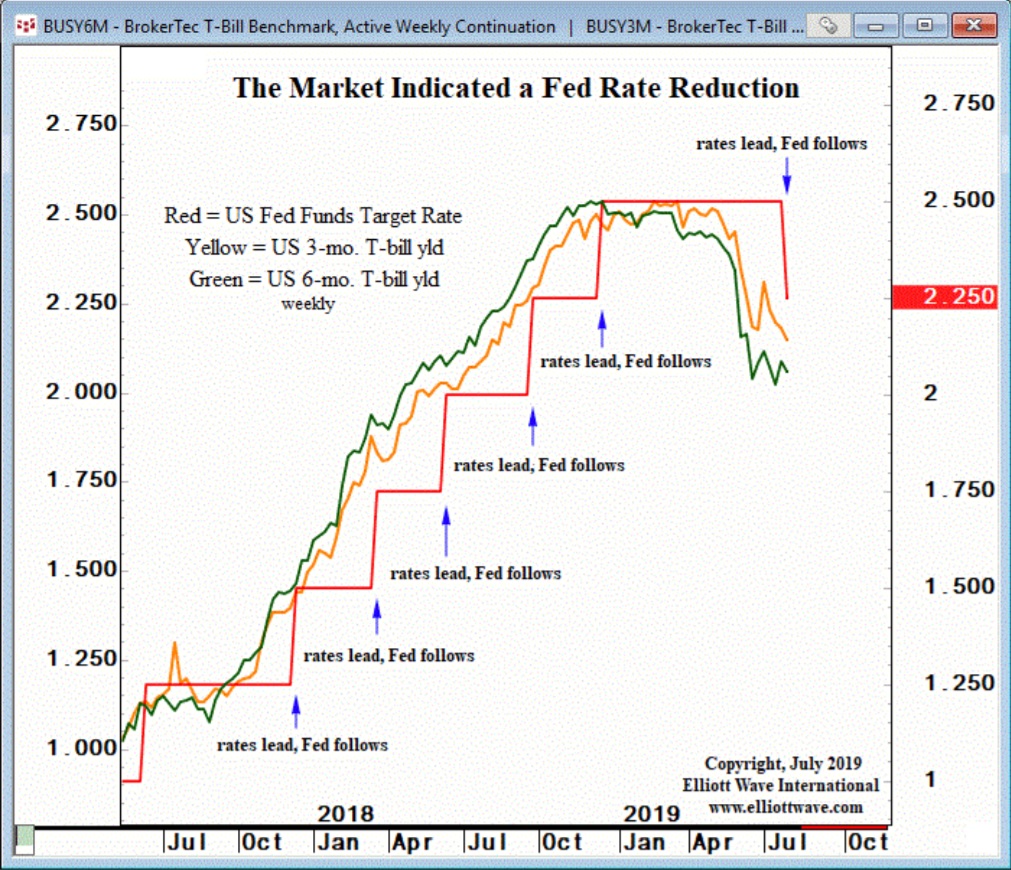 FED acted exactly as we said they would. Sign up for Elliott Wave International newsletter to be alerted about the upcoming financial events before it is in the news.