Major Fed Myth: Debunked
The Fed is reactive in setting rates – not proactive

The days of near-zero interest rates are long gone — at least for now.

As we look back on 2022, we know that it’s been a year of rising interest rates, and many observers say it’s all due to the Fed.

But it’s a flat-out myth that the Fed determines the trend of interest rates. The market does. The Fed merely follows.

Here’s a chart and commentary from the December Elliott Wave Theorist, a monthly publication since 1979 which covers major financial and cultural trends: 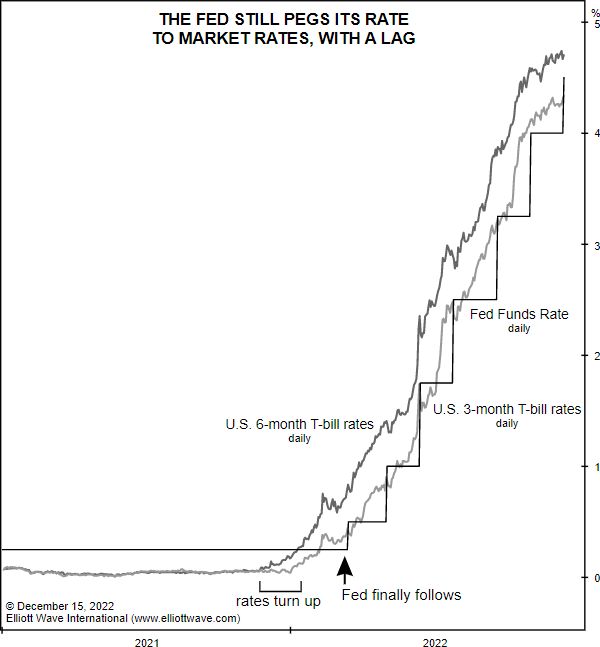 The chart updates the Fed’s interest-rate activity since mid-2021. As you can see, the Fed’s rate changes have continued to lag rate changes in T-bills as set by the market. The Board’s decisions are not magical or even thoughtful. They look at the market rate, and they adjust the Fed Funds Rate accordingly. That’s all there is to it. That’s all there ever has been to it.

So, given that the market sets rates and the Fed follows, a key takeaway is that the Fed’s interest-rate actions produce no outcomes (for example, “stepping on the brakes” of the economy) that wouldn’t have happened through regular market forces.

Other central banks around the world also lag the market. Consider the European Union. Here’s a historical snapshot from Robert Prechter’s book, The Socionomic Theory of Finance: 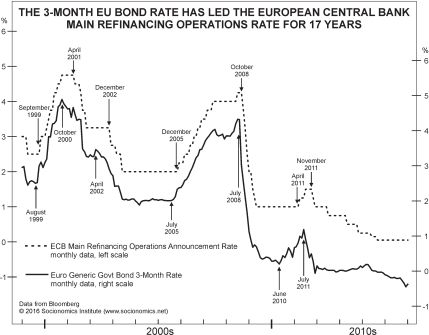 The chart plots monthly data for the interest rate of the freely-traded, 3-month euro generic government bond versus the European Central Bank’s (ECB’s) main refinancing operations rate, which is Europe’s equivalent to the U.S. federal funds rate. As these graphs show, rate-setting actions by the ECB have lagged the freely traded debt market at all seven major turning points in interest rates since 1999. The lags vary from one to ten months, and the average lag is 5.3 months.

You can find the same principle at work in the United Kingdom, Australia and other global central banks.

It may be difficult for central bank watchers to latch onto the idea that markets guide central banks rather than the other way around. Yet, no data show otherwise.

The December Elliott Wave Theorist provides you with more financial insights, including warning signs about the stock market.

And, speaking of warning signs about the stock market, you may want to become familiar with the Dow Industrials’ Elliott wave pattern — which can help you to anticipate what’s next.

The Wave Principle often indicates in advance the relative magnitude of the next period of market progress or regress. Living in harmony with those trends can make the difference between success and failures in financial affairs.

If you’d like to learn the details of the Wave Principle, here’s good news: You can access the entire online version of the book for free once you become a member of Club EWI, the world’s largest Elliott wave educational community.

Joining Club EWI is a great way to start 2023 because all the free Elliott wave resources which accompany a Club EWI membership will help to provide you with an independent perspective on financial markets which you may not be getting from other sources.

And, by the way, a Club EWI membership itself is also free.

So, get started now by following this link: Elliott Wave Principle: Key to Market Behavior.