Next Time You See “4 Times as Many Bulls as There Are Bears,” Remember This
See how stock investors’ “historic optimism” served as a warning

After a 12-year uptrend, just when caution might be in order, investor psychology has remained highly and stubbornly optimistic.

Large traders are more exuberant than ever. On June 11, large trader buy-to-open call purchases jumped to 45%, a new record.

A highly bullish outlook was also expressed in this July 10 Marketwatch headline:

Notice that the headline’s suggestion is that the bull market has just started.

That five-year forecast might turn out to be correct — but then again, keep this in mind from an earlier 2021 Financial Forecast:

A top never feels like a top. The bigger they are, the more permanent they seem.

And here’s yet another recent look at sentiment via a chart and commentary from the July 14 U.S. Short Term Update, a thrice weekly Elliott Wave International publication which provides near-term analysis of key U.S. financial markets: 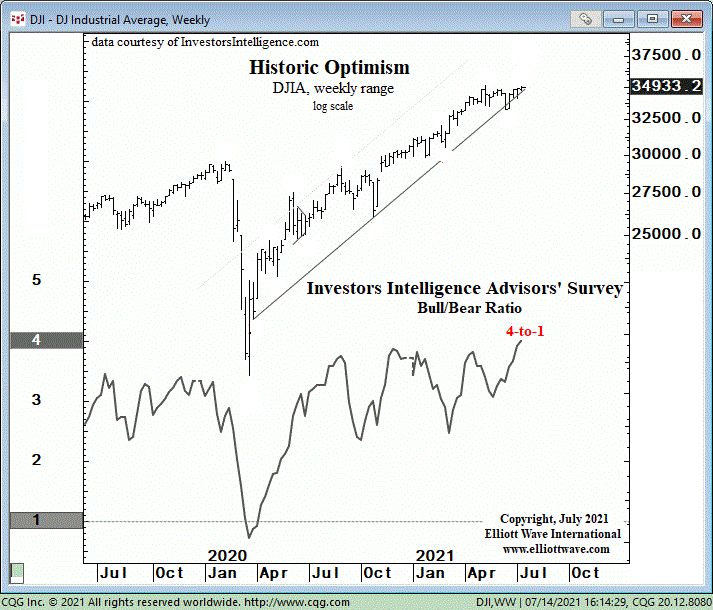 The most recent result of the weekly Investors Intelligence Advisors’ Survey (InvestorsIntelligence.com) shows that the percentage of bulls rose to 61.2%. … With the percentage of bears dropping to just 15.3%, there are now four times as many bulls as there are bears. Since the stock market crash of 1987, a span of a Fibonacci 34 years, only 1.5% of the total weekly readings in the II bull/bear ratio have been higher than the 4-to-1 ratio of this past week.

Interestingly, just two days after this analysis published, the Dow Industrials dropped nearly 300 points on Friday (July 16) and on the following Monday, as of this writing, the Dow has tumbled more than 900 points.

To stay independent from the sentiment of the crowd, it’s a good idea to employ Elliott wave analysis and other technical indicators. They will help you stay on track — objectively, independently from the “bullish” news that inevitably fools the crowd.

If you’d like to learn about Elliott wave analysis, or need to brush up on the subject, there’s great news: You can access the online version of Frost & Prechter’s Elliott Wave Principle: Key to Market Behavior — 100% free.

Getting back to the book, here’s a paragraph from the first page of Chapter 1:

August 21 Update:
Stocks: What to Make of Wall Street’s Sky-High Optimism
“I believe that the market moves in whatever direction hurts the most participants”

To add icing to the cake, there’s this notable factoid (CNBC, August 16):

So, after such a historic run, one might think that many Wall Street analysts would say that it’s time to take at least some chips off the table.

Well, not so. Look at this astounding August 14 Bloomberg news item:

So, what should one make of this uniformity of thinking and historic bullishness among Wall Street analysts?

Consensus regarding the future course of financial-market prices has an awesome power to become ossified in the wrong direction at markets’ major turning points.

The dictionary defines “ossified” as “having become rigid or fixed in attitude or position.”

That’s the very attitude that prompted Dave Lutz, head of ETFs at JonesTrading Annapolis to say:

“I’m a believer that the market moves in whatever direction hurts the most participants. If all the analysts on the Street are bullish, I’d be very cautious.”

That quote is from the same Bloomberg news item mentioned a moment ago, and Elliott Wave International agrees with that view.

After all, history shows that most investors, including professionals, are “surprised” at major turning points in the stock market.

The same patterns of investor psychology have played out time and again. Elliott waves are a direct reflection of these patterns.

You can get the details of how the Wave Principle helps investors to forecast the price paths of financial markets by reading the online version of the book — 100% free!

You can have the book on your computer screen in just a few minutes by following this link: Elliott Wave Principle: Key to Market Behavior — free and unlimited access.