Market action this year has hurt A LOT of people. Cryptos. Meme stocks. Tech stocks. We’ve seen some huge percentage declines — all against a backdrop of historic leaps in interest rates and inflation.

Lifestyles irrevocably changed, not for the better.

But a few folks got it right.

“2022 through 2024 will witness the biggest bear market ever recorded.”

And in early 2021, in reference to headlines about a new “roaring twenties,” Hochberg and Kendall included this chart and commentary in their Financial Forecast: 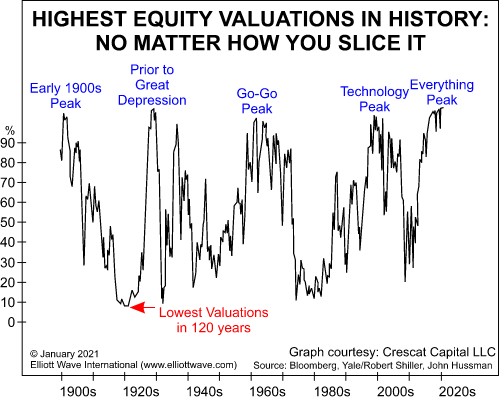 “The great prior valuation extremes arrived amidst relatively robust economic performance. … Today’s weak economy accompanies the overvaluation present during the current fifth and final wave of the Grand Supercycle degree bull market. The anticipation of a roaring new era of stock gains in the face of broad economic deterioration is exactly what we should expect at the top of a major fifth wave.”

Many high-flying meme stocks peaked the very next month. Bitcoin and the Nasdaq topped out in November 2021 and the Dow and S&P 500 followed soon after in January 2022.

Are Prechter, Hochberg and Kendall always that right? Of course not.

But: Are they right enough — and better than the mainstream?

So here’s the deal. For $17, our friends at EWI are offering you 1-week’s access to those twenty pages, plus their 3x/week Short Term Update — and they’ll include 3 FREE resources to help you get started. All told, it’s nearly $300 worth of material.