Wipeout! New Update on Our “Green Bond” (ESG) Forecast
Excessive euphoria in financial markets is usually a big reason to be “skeptical”

For instance, here’s an Oct. 9, 2020 headline from Pensions & Investments:

However, the Elliott wave structure of a global green-bond index was sending a warning signal. 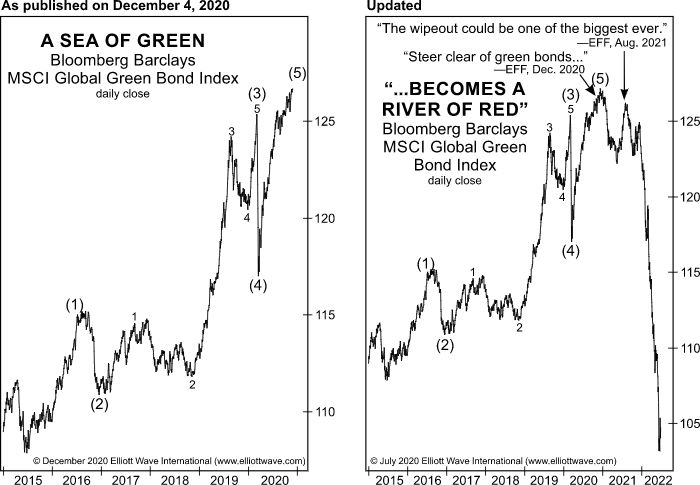 Focusing on the left chart first, which had sported a five-wave advance (meaning a trend turn was imminent), the December 2020 Global Market Perspective said:

Experts have loudly proclaimed that so-called social bonds will be the next great innovation. … But the euphoria surrounding this new debt is actually one of the biggest reasons to remain skeptical. … Steer clear of both green bonds and social bonds.

Indeed, as the updated right chart shows, the price began to fall shortly after that warning. Eventually, a countertrend rally ensued and by July 13, 2021, a Bloomberg headline said:

Once again, the Global Market Perspective provided a warning — this one from the August 2021 issue:

The wipeout could be one of the biggest ever.

You can see the big price tumble that occurred thereafter.

Do understand that the Elliott wave model does not guarantee that a financial market will behave in one fashion or another. At the same time, it’s the best analytical method of which Elliott Wave International knows because it’s based on the repetitive patterns of investor psychology.

Indeed, here’s what Frost & Prechter had to say in Elliott Wave Principle: Key to Market Behavior:

The Wave Principle is governed by man’s social nature, and since he has such a nature, its expression generates forms. As the forms are repetitive, they have predictive value. [emphasis added]

For a limited time, our friends at Elliott Wave International are offering you 5 quick takes on Elliott wave patterns in several markets — stocks, pot stocks and bonds — all from their new, July 2022 issue of the Global Market Perspective.

The publication provides analysis for 50+ of the world’s key markets.