Why Investors in U.S. Treasuries Face Major Risk
Rising rates will be “disastrous” for governments, other debtors and creditors

The market for U.S. Treasuries is the biggest bond market in the world, and it appears that potentially big trouble may be afoot.

Earlier this month, none other than the U.S. Treasury Secretary herself (Janet Yellen) acknowledged …

… “a loss of adequate liquidity in the [U.S. government debt] market.”

Then, in a statement last week, Bank of America strategists expressed concerns about …

No wonder other analysts and traders have voiced worries about U.S. Treasuries being a potential key factor in the next financial crisis.

It may interest you to know that Elliott Wave International has been ahead of this developing story.

In April of this year, The Elliott Wave Theorist, a monthly publication which provides analysis of financial markets and major cultural trends, showed this amazing chart and said: 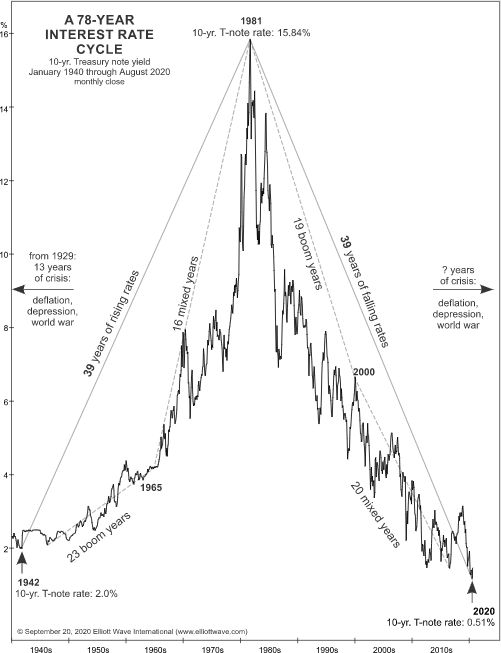 Because of the 39-year symmetry in this picture and the unprecedented arrival of negative interest rates, we have been adamant that interest rates bottomed in 2020. Sure enough, they have been rising since. … Rising interest rates will be disastrous for governments and other debtors as well as for creditors who hold long term bonds.

[U.S. Treasury long bond futures] are collapsing, as rates shoot higher. The yield on … 10-year treasury paper pushed to 4.34%, its highest level in 15 years. Bond investors are being absolutely crushed.

The question now is: Is the rise in yields almost over or do they have a lot further to go?

Some investors believe Treasury yields are close to peaking. …

All financial markets have countertrend moves and it’s certainly possible that one is ahead for U.S. Treasuries.

Yet, what’s important to know is the main trend.

You can get a handle on the main trend of U.S. Treasuries by employing the Elliott wave model.

If you’re unfamiliar with Elliott wave analysis, or need a refresher, a great resource is Frost & Prechter’s Wall Street classic, Elliott Wave Principle: Key to Market Behavior. Here’s a quote from the book:

If you’d like to read more about the Elliott wave model, here’s some good news: You can access the online version of Elliott Wave Principle: Key to Market Behavior for free once you become a member of Club EWI, the world’s largest Elliott wave educational community.

Club EWI is free to join and members enjoy complimentary access to a wealth of Elliott wave resources on financial markets, investing and trading, including videos and articles from Elliott Wave International analysts.

Just follow this link to get started: Elliott Wave Principle: Key to Market Behavior — get free and instant access.