THIS is Why the Real Estate Tide is Turning
Here’s your next step to get a handle on the global property market.

Treat houses as a consumption item — or simply as a place to live, and history shows that real prices will fluctuate only modestly over the decades.

Treat houses as an investment, and the value of houses takes on the characteristics of the stock market.

This is from the January 2012 Elliott Wave Theorist, a monthly publication which covers financial markets and major cultural trends — in the wake of the prior housing bust:

Real home prices [in a U.S. index] stayed within a range of 66-123 [from 1890] until 1997. Then they went straight up for 9 years. Inflation doesn’t account for the rise in real prices, because inflation has been factored out. And loans were available for decades without causing real prices to soar. Why did it finally happen? … Real estate began to take on the aura of being an investment.

As we know, after going up for 9 straight years, the housing market then crashed — just like the stock market is apt to do at times.

That same psychology of “a house as an investment” sent prices soaring again in the most recent housing bubble.

However, trouble has already started to brew. Here’s a Sept. 2 CNBC headline:

This brings us to Elliott Wave International’s latest analysis — which is provided in the just-published special report “Home Prices: How Much Trouble Are YOU In?”

Here’s just one of the several charts you’ll find in the special report, along with the commentary: 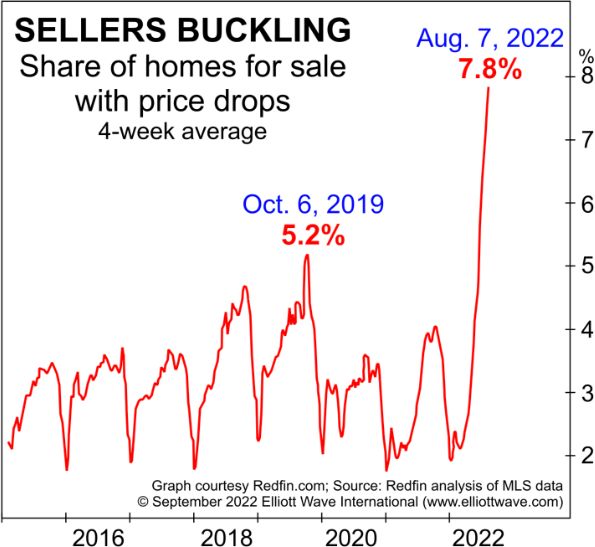 Many of the cities that led the real estate market on the way up are now doing so on the way down. Home sellers in former boomtowns have been quickest to lower asking prices. …

Nationally, Redfin reports that the percentage of sellers lowering their prices is the largest since it started tracking the data in 2012. … The tide is turning.

Likewise, builders themselves have been reducing prices. A Sept. 24 Yahoo Finance article noted:

Almost 1 in 4 home builders reported reducing their price this month, up from 19% in August … Home builder confidence fell three points to its lowest level since May 2014.

You’ll find more evidence in the special report that the “tide is turning” for the U.S. housing market, including examinations of housing starts and what’s going on with a firm that’s been a big player in the housing flipping business.

And getting back to asking prices, you may be interested in knowing that on August 15, Bloomberg reported that asking prices in the United Kingdom fell at their fastest pace in two-and-a-half years.

Speaking of which, the coverage in the special report extends beyond the U.S. as Elliott Wave International looks at European, Asian-Pacific and Australian property markets.

Here’s the good news: You can access the special report “Home Prices: How Much Trouble Are YOU In?” for free for a limited time.

Just follow this link: “Home Prices: How Much Trouble Are YOU In?”