Will the “Greatest Depression” Start in Europe?
This action by investors resulted in “the highest total since 2014, and probably ever”

Only time will tell if history repeats. Yet, here in 2022, we do know that troubling signs are developing in Europe’s biggest economy.

First, look at this recession indicator from the August Global Market Perspective with the commentary below: 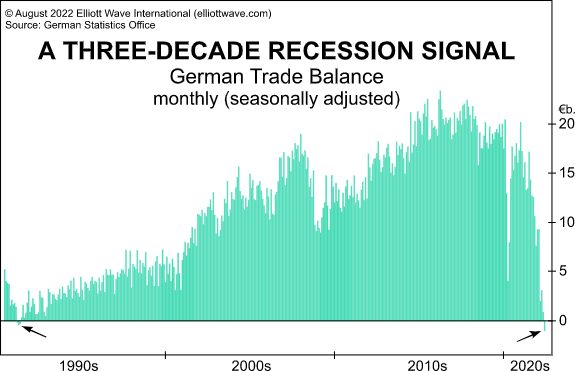 Companies in Germany are seeing “softer demand for their products amid a darker economic outlook.” (Bloomberg, 7/4/22) Germany’s GDP also stagnated in July. More importantly, the economy recorded a 0.5% drop in overseas sales while imports were up 2.7%, meaning that the country recorded its first trade deficit since 1991. While deficits themselves are not recessionary, the change in behavior is notable, and, in case you’re wondering, 1991 was indeed a recession year.

Since this analysis published, an August 22 Reuters headline said:

Some of Germany’s neighbors are likely already experiencing economic contractions — like Estonia and Latvia. Other economies — Austria, Belgium, Luxembourg and Portugal — registered shrinking GDPs in Q2.

Getting back to Germany, here’s more commentary and another chart from the August Global Market Perspective: 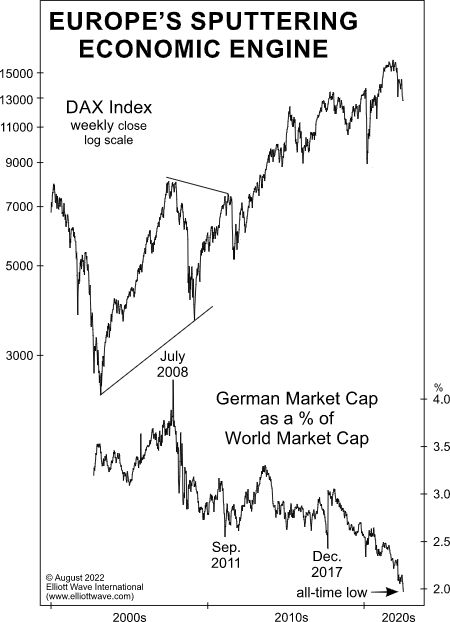 The bottom graph on this chart shows the market capitalization of German companies as a percentage of worldwide market cap. Notice that it has been declining since its high point in 2008. … The percentage has dipped relentlessly lower, falling to an all-time low of 1.92% just two weeks ago. Today, among Germany’s largest four companies, only one ranks among the world’s 100 largest.

Free Report ($30 value): See 3 more charts that open your eyes to what’s next

The insights above are also featured in a new special report that you can access right now (free, easily a $30 value).

The report gives you 4 short, powerful excerpts from one of our most popular services — Global Market Perspective. Usually reserved for subscribers, we think you will also appreciate the insights. It’s our quick take on markets in the U.S., Europe and Asia, plus a look at the U.S. dollar.

FREE: Get “4 Market Charts You Won’t See Anywhere Else” now >>