Has Crypto-Mania Finally Run Its Course?
Here’s a high-profile parallel between tech- and crypto-mania

When a company that’s part of a major financial trend buys the naming rights to a professional sports stadium or arena, watch out!

History suggests that such a prominent move might be a sign that the fortunes of that company are about to dramatically change.

Well, in 2000, the firm bought the naming rights to the stadium of a major league football team. 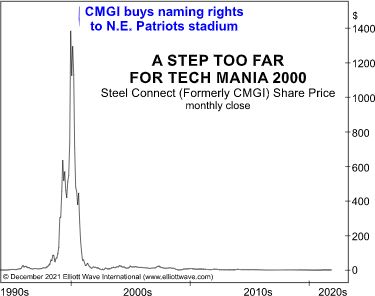 The chart shows the stock market performance of CMGI, which is now known as Steel Connect. In August 2000, the company bought the naming rights to the home stadium of the New England Patriots for 15 years. Just two years later, in the wake of the dot.com bust, they were forced to relinquish their agreement.

Relatedly, in 1999, PSINet bought naming rights to the NFL stadium at Camden Yards in Baltimore. But, in 2002, the then internet services provider’s name was removed from the stadium as PSINet went bankrupt.

Here in 2021, there appears to be a developing parallel between tech-mania and crypto-mania.

Here’s a March 26 headline from the Miami Herald:

And this is another news item from Nov. 17 (fastcompany.com):

Of course, that’s where the L.A. Lakers play and Crypto.com has agreed to fork over $700 million for a 20-year naming rights deal. 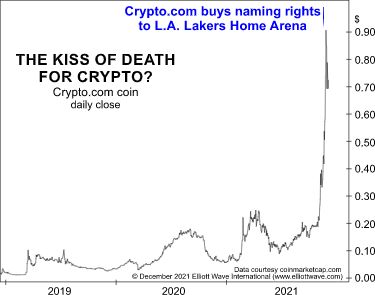 This chart shows Crypto.com’s recent performance, with an arrow indicating the day they announced their coming stadium debut.

Will Crypto.com’s price follow a trajectory similar to that of CMGI?

The Elliott wave method can help you to answer that question.

Get detailed insights into the “predictive value” of the Wave Principle by reading the entire online version of the book — 100% free.

All that’s required for free access is a Club EWI membership. Club EWI is the world’s largest Elliott wave educational community and is free to join. Members enjoy free access to a wealth of Elliott wave resources on investing and trading without any obligation.