New Update on the Public’s Voracious Appetite for Stocks
Here’s a month-to-month breakdown of how much money individuals are spending on stocks.

It’s been noted before in these pages that …

That was an April CNBC headline.

That remains an astounding fact to contemplate and a testimony to a widespread cavalier sentiment toward risk. The basic attitude is that stocks almost always go up.

Well, nearly a half year since that CNBC headline published, the public’s interest in stocks has remained intense. 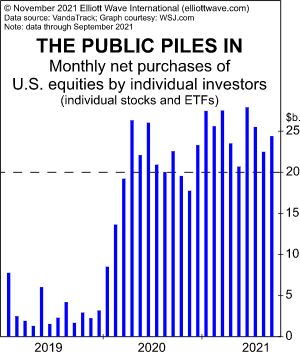 When it comes to retail trading, investors are positively euphoric. JMP Securities estimates that 10 million new traders entered the stock market in the first ten months of the year, which is “on pace” with the prior record year in 2020. The chart of monthly net purchases of U.S. equities shows that buying fever is increasing. Last year was a record year for net buying, but it featured just 5 months in which net purchases surpassed $20 billion. According to VandaTrack, net buying has exceeded $20 billion in every month of 2021, with data through September.

Of course, the only reason why anyone buys a financial asset is that they believe the price will go up.

Indeed, this Oct. 21 financial headline is indicative of the pervasive bullish sentiment (Marketplace):

History suggests that the answer is an emphatic “no.”

The current uptrend — no matter how dogged — will change sooner or later.

The best way to anticipate this change is by employing the Elliott wave model.

Staying highly attuned to the progressing wave structure has never been more important.

If you would like to delve into the details of how the Elliott wave model can help you forecast financial markets, you are encouraged to read Frost & Prechter’s Wall Street classic, Elliott Wave Principle: Key to Market Behavior.

Here’s an excerpt from the book:

[Ralph N.] Elliott recognized that not news, but something else forms the patterns evident in the market. Generally speaking, the important analytical question is not the news per se, but the importance the market places or appears to place on the news. In periods of increasing optimism, the market’s apparent reaction to an item of news is often different from what it would have been if the market were in a downtrend. It is easy to label the progression of Elliott waves on a historical price chart, but it is impossible to pick out, say, the occurrences of war, the most dramatic of human activities, on the basis of recorded stock market action. The psychology of the market in relation to the news, then, is sometimes useful, especially when the market acts contrarily to what one would “normally” expect.

Our studies suggest not simply that news tends to lag the market but that it nevertheless follows exactly the same progression.

You can read the entire online version of Elliott Wave Principle: Key to Market Behavior — 100% free!

Club EWI is the world’s largest Elliott wave educational community and is free to join. More than that, members enjoy free access to a wealth of Elliott wave resources on investing and trading without any obligations.

Simply follow this link to get started right away: Elliott Wave Principle: Key to Market Behavior — free and unlimited access.