Here’s Why Blind Contrarianism Failed in 2020.
There is only one instance when the investing crowd is right.

Yes, there are many times when the market’s Elliott wave structure suggests that an investor should take a position “against the crowd,” or put another way, be a contrarian.

Prime examples are at market bottoms and tops.

However, keep this in mind from a classic Global Market Perspective, a monthly Elliott Wave International publication which provides analysis of 50-plus worldwide markets:

[S]trict adherence to the wave model habitually puts wave analysts where they should be: against the market crowd. But not always. At specific points in the market’s wave structure, wave analysts run with the herd.

A prime example of when Elliott wave practitioners have a lot of company is during the most severe part of a bear market. At such times, the Elliott wave model suggests that more downside is likely ahead and the crowd is likewise fully aware that the market is in the grip of a ferocious bear. The same applies to the strongest part of a bull market.

So, following the Elliott wave model and consistent contrarianism are not the same.

Blind contrarianism failed in 2020, because some of the world’s most influential benchmarks — the DJIA in the United States, the DAX in Europe, and the Shenzhen Composite in China — spent much of the year rallying in small-degree third waves.

That issue of the Global Market Perspective went on to show this chart and said: 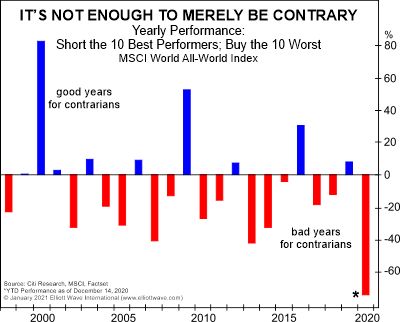 Turns out that 2020 was not just a bad year for contrary investing, it was the strategy’s worst year on record.

The contrary strategy’s best years are also illustrative. The technique returned 80% as the first technology bubble burst in 2000, and it made 60% in 2009, as equities rallied following the 2008-09 financial crisis. The year 2016 was also a good year for contrarians who wagered that cyclical stocks would benefit most from an economic expansion.

What about major global markets in 2021? Will contrarian investing be successful for the market or markets in which you are interested? In other words, should you be selling when others are buying, and vice versa?

Elliott wave analysis can help you answer those questions.

Without Elliott, there appear to be an infinite number of possibilities for market action. What the Wave Principle provides is a means of first limiting the possibilities and then ordering the relative probabilities of possible future market paths. Elliott’s highly specific rules reduce the number of valid alternatives to minimum.

If you’d like to find out about “Elliott’s highly specific rules,” you can do so by reading the online version of Elliott Wave Principle: Key to Market Behavior for free.