Bitcoin: “Crowded Trades” Can End Badly. Here’s How to Spot One.
Cryptos can hugely reward, yet just as swiftly — punish.

The phrase “bank run” tends to conjure up images of the 1930’s Great Depression.

However, that phrase is now applicable to the 2021 world of cryptos.

This is from a June 17 coindesk.com article:

A near-total collapse in the price of a share token of a decentralized finance (DeFi) protocol was “the world’s first large-scale crypto bank run,” the people behind Iron Finance said in a blog post providing a postmortem. The run brought the worth of the protocol down from $2 billion to near zero on [June 16].

It all started when “a series of large holders tried to redeem their IRON tokens and sell their iron titanium (TITAN), the token of the Iron Protocol.” In other words, a lot of people were headed for the exit door at the same time.

Of course, that has a parallel to a “bank run,” when throngs of depositors want to take their money out of the bank all at once.

So, like with other exceptionally volatile markets, cryptos can hugely reward, but just as quickly — punish. 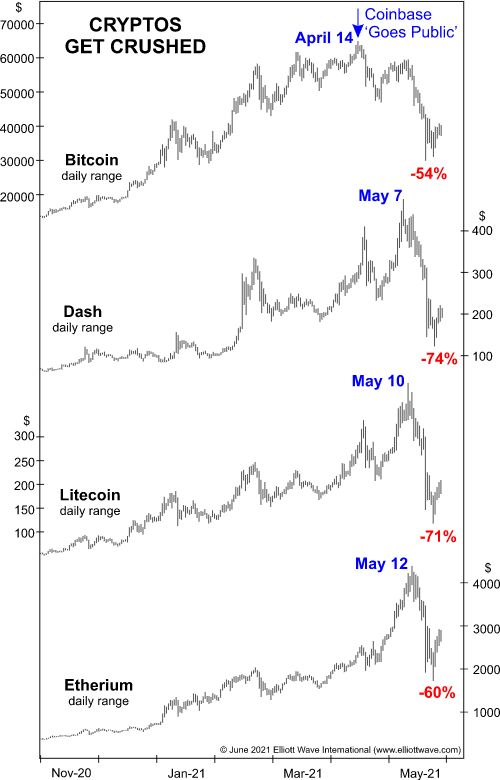 So-called altcoins, dash, litecoin and ethereum, rallied until May 7, May 10 and May 12, respectively. Then they crashed. Various other indicators also pressed on. According to a Bank of America monthly survey, fund managers were never as enamored with bitcoin as they were in the first few days of May. The result of its poll of 194 managers showed that bitcoin was the “most crowded trade,” with 43% saying they were long bitcoin.

Mind you, this chart published on May 28 and you probably know that cryptocurrency volatility has persisted since.

The question now is: What’s next for cryptocurrencies?

Decentralized finance and cryptocurrencies may be the wave of the future, but the odds are low that it will be led by bitcoin, or even include it. Investors have come to view the current conditions as normal, but they’re anything but.

You can find our latest commentary on cryptocurrencies, plus Elliott wave analysis, in our Global Market Perspective.

And, speaking of Elliott wave analysis, if you’d like to learn how the Elliott wave model can help you as an investor or trader, you are encouraged to read Frost & Prechter’s book, Elliott Wave Principle: Key to Market Behavior. Here’s a quote:

No matter what your convictions, it pays never to take your eyes off what is happening in the wave structure in real time. Ultimately, the market is the message, and a change in behavior can dictate a change in outlook. All one really needs to know at the time is whether to be long, short or out, a decision that can sometimes be made with a swift glance at a chart and other times only after painstaking work.

Good news! You can read the entire online version of this Wall Street classic for free!

That’s right — all’s that required for free access is a Club EWI membership, which is also free. Club EWI is the world’s largest Elliott wave educational community and allows members free access to a wealth of Elliott wave resources on investing and trading.