Crude Oil Sinks 20%: Why “Oversupply” Isn’t the Half of It

Oil prices have defied bullish efforts to curb oversupply. Here’s our take on why.

I have a friend… let’s call him Larry. Let’s just say, Larry is not a fan of taking risks. He likes his reflexes fast, his cars slow, and his financial markets secure for the long haul.

So, when Larry called me up at the beginning of this year to say he’s boarding the highly-volatile crude oil market, I was appropriately stunned. But here’s the thing. He was still being “wary Larry,” meticulously weighing the risks. It just so happens they seemed to pale in comparison to the overwhelming rewards.

See, at the time, oil bulls had been served the ultimate bullish advantage on a black-gold platter; namely, the first major oil supply cut in eight years.

To recap: On January 1, the long-awaited agreement between OPEC and its major exporting partners like Russia to curtail production by 1.8 million barrels a day went into effect.

And, according to the mainstream experts, the massive effort to cut the oil glut would also light the fire beneath oil prices. Here, these news items from January 2017 capture the bullish enthusiasm for crude’s upside:

Yet — instead of rallying, crude oil prices did the total opposite. After a brief spike, first prices went sideways, and come February, oil prices lost their grip on an 18-month high, falling in a down-up-down series to a 10-month low on June 20.

It goes without saying that Larry, along with the entire throng of supply-cut-watching-oil-bulls, were caught off guard by oil’s slide. Beckoned a June 21 news source:

“Bulls discount OPEC cuts…as oil set for worst H1 [econ speak for first half of the year] since 1997. The slide in oil prices seems to be unstoppable. The supply deal’s effectiveness is increasingly questioned.” (Reuters)

Wait. Now — six months later and 20% lower in price — the “supply deal’s effectiveness” is questioned? What about before?

See, we believe oil’s selloff was going to occur despite OPEC’s historic cuts. The reason being, the oil cartel does not control the long-term oil price trend; investor psychology, which unfolds as Elliott wave patterns on oil’s price chart, does.

And, right at the onset of oil’s turn down, on February 22 our Energy Pro Service identified a bearish, Elliott wave structure on oil’s price chart. There, Energy Pro Service chief analyst Steve Craig outlined the following long-term course and wrote:

“Repeating: The jury is out, but my working assumption is that wave (A) of triangle wave ((4)) has concluded. If so, the market should trace out a large zigzag for the wave (B) decline that retraces at least 55% of the wave (A) advance.” 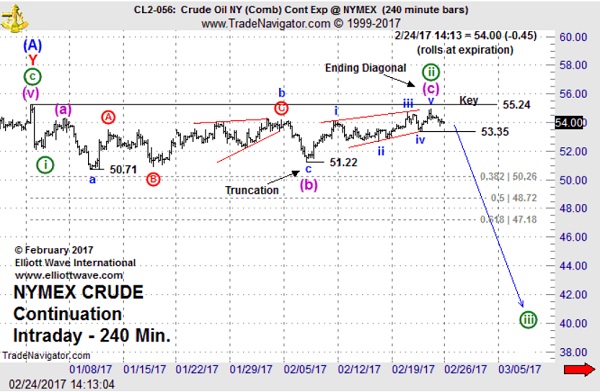 The next chart captures the complex unwinding of oil prices into bear market territory: 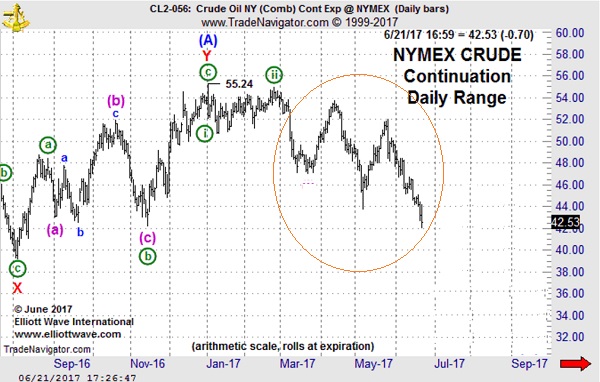 It’s safe to say, next time wary Larry decides to participate in the oil market, he may think twice about relying 100% on fundamental, news-led analysis as his guide.

Adding Elliott wave analysis into the mix may just give him — and you — that objective, risk-limiting insight into crude oil’s next big move all traders look for.

Get 10 Insights on The Elliott Wave Principle

Learn how you can apply the Wave Principle to improve your trading and investing in this free 10-lesson tutorial. You’ll learn: