There is a glaring hole in the popular understanding of what drives gold’s price.

That sounds like a solid explanation… except, the Fed officials themselves disagree!

Consider their own statements:

Bernanke’s successor Janet Yellen later concurred: “I don’t think anybody has a very good model of what makes gold prices go up or down.”

And at the 2014 New Orleans Investment Conference, perhaps the most famous Fed chair, Alan “the Maestro” Greenspan, explained that gold’s “value…is outside the policies conducted by governments.” (You know, like the highly revered quasi-government institution he used to be the head of.)

Investors accept this idea as fact because they hear it endlessly. But the notion is simply not accurate. As a result, these investors find themselves on the wrong side of the trend time and time again.

Fortunately, you don’t have to be one of them.

Principle #1: Forget the fallacy that “gold follows the Fed.”

Consider this chart of gold prices alongside the Fed’s monetary policy since 2011. 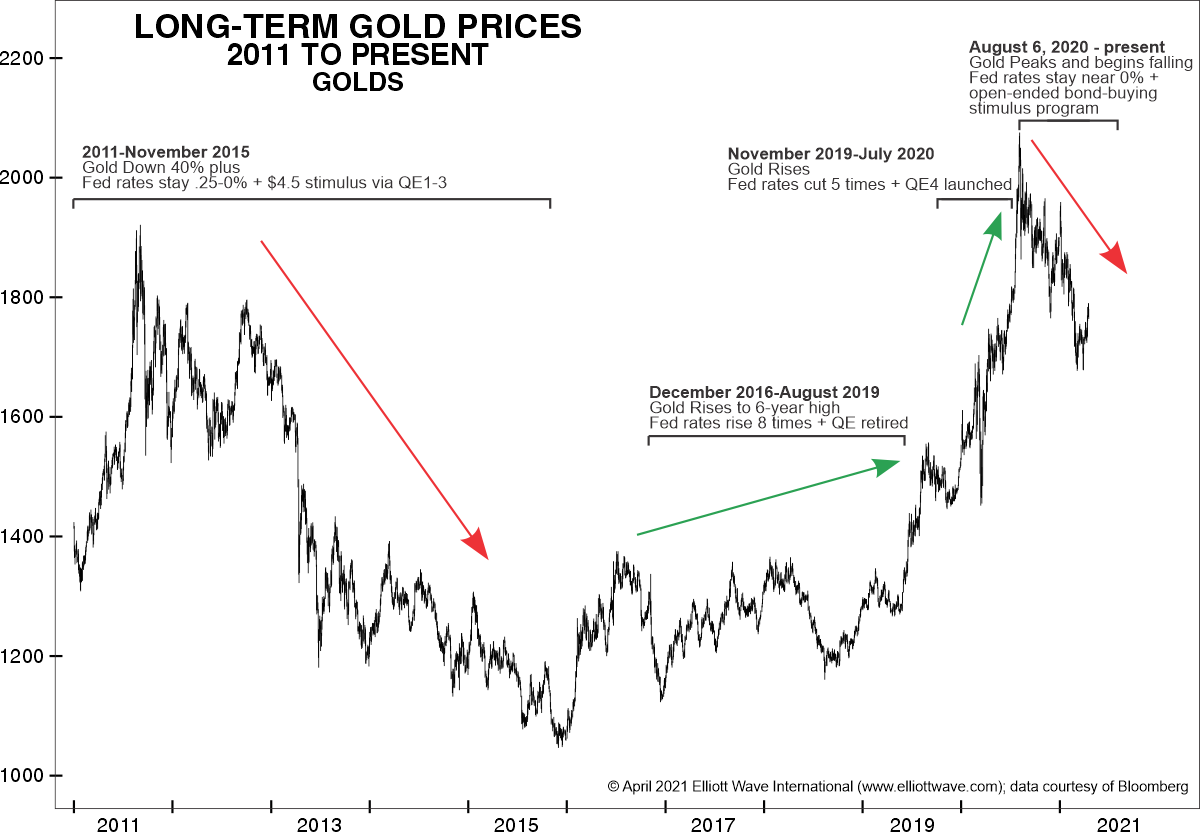 In fact, it was just the opposite. During the same period, in 2011-2015, the Fed left interest rates at their lowest level ever, 0% to .25%. But that’s not all. The Fed also injected $4.5 trillion in stimulus into the markets and economy during this time via quantitative easing. According to conventional wisdom, either action should have pushed gold’s price higher — and together, MUCH higher.

Nope! During this time, the Fed RAISED rates eight times — and QE had long been retired. Gold rose anyway.

Ha! Despite the dovish Fed and the new QE, gold’s rally resumed.

If anything, since 2011, the mainstream’s understanding of the Fed/gold relationship has been backward.

Except, there is an even better explanation. Read it now in EWI’s new “Gold Investor’s Survival Guide.” You’ll learn an objective method to help you forecast gold’s price moves, how to identify and stick with gold’s trend and more. A $49 value, yours FREE. Get it now at elliottwave.com.