Small Traders vs. Large Traders vs. Commercials: Who Is Right Most Often?
When one of these groups acts, “the odds become high for a change of trend”

It’s useful to know who is doing what in particular financial markets.

You’ll find out why as we proceed, however, let’s first start off with some basic background information.

A classic Elliott Wave Theorist, a monthly publication which provides analysis of financial markets and social trends, provides insight as to why only one of these groups is usually right at key turns:

Small traders are typically on the wrong side of the market at the turns. You might think that large traders, because they have a lot more money, are right a lot, but they are likewise usually wrong at the turns. The commercials are the only participants in commodity markets who generally buy low and sell high. … Commercials are in the business of manufacturing, not speculating, so they think economically rather than financially. They do not perceive commodities as investment items, so they’re not participating in the herd.

Large speculators (or traders) are comprised mainly of hedge fund managers. Let’s focus on this group, along with the commercials, as we review the commodities market.

Here’s a chart and commentary from the November Elliott Wave Financial Forecast, a monthly publication which focuses on major U.S. financial markets: 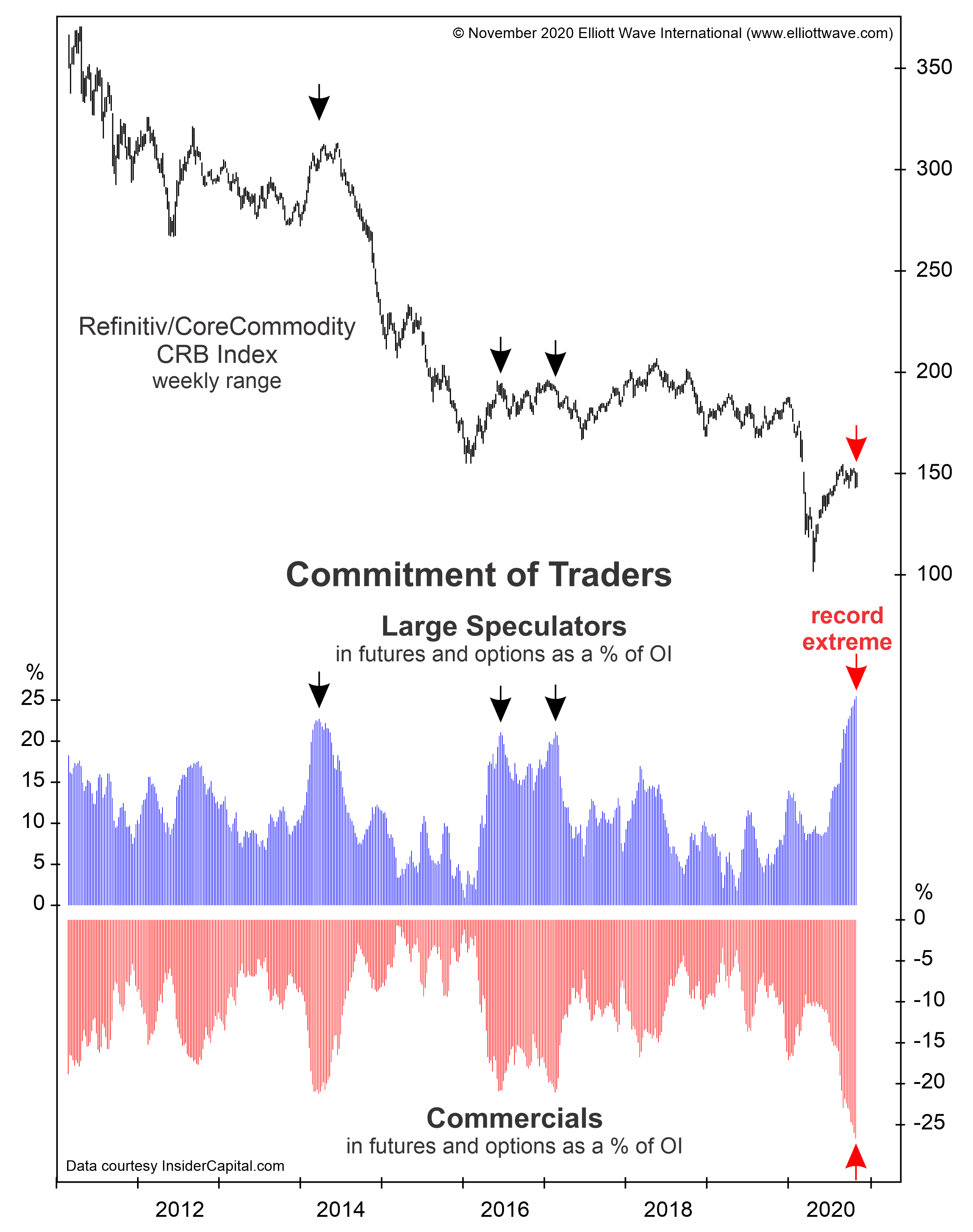 The top graph on the chart shows the weekly CRB index from March 2011 to the present. The middle graph shows Large Speculators’ combined net-long position in 17 active commodities as a percentage of total open interest. The bottom graph shows the same for Commercials. Large Specs are trend-followers who usually increase their net-long positions as prices rise, and vice versa. When their size becomes extreme relative to historic norms … the odds become high for a change of trend. The Commercials usually take the other side of the Large Spec trade. … Large Specs are currently net long 25.46% of open interest, their largest position on record.

This information about the actions of major participants in the commodities market is valuable, yet — an investor needs to know more — namely, the Elliott wave count of the CRB index.

Here are some insights into the Elliott wave method of analyzing financial markets from the book, Elliott Wave Principle: Key to Market Behavior, by Frost & Prechter:

Without Elliott, there appear to be an infinite number of possibilities for market action. What the Wave Principle provides is a means of first limiting the possibilities and then ordering the relative probabilities of possible future market paths. Elliott’s highly specific rules reduce the number of valid alternatives to a minimum. Among those, the best interpretation, sometimes called the “preferred count,” is the one that satisfies the largest number of guidelines. Other interpretations are ordered accordingly. As a result, competent analysts applying the rules and guidelines of the Wave Principle objectively should usually agree on both the list of possibilities and the order of probabilities for various possible outcomes at any particular time. That order can usually be stated with certainty. Do not assume, however, that certainty about the order of probabilities is the same as certainty about one specific outcome. Under only the rarest of circumstances do you ever know exactly what the market is going to do. You must understand and accept that even an approach that can identify high odds for a fairly specific event must be wrong some of the time.

You can prepare yourself psychologically for such outcomes through the continual updating of the second best interpretation, sometimes called the “alternate count.” Because applying the Wave Principle is an exercise in probability, the ongoing maintenance of alternative wave counts is an essential part of using it correctly. In the event that the market violates the expected scenario, the alternate count puts the unexpected market action into perspective and immediately becomes your new preferred count. If you’re thrown by your horse, it’s useful to land right atop another.

If you would like to learn more about the Wave Principle, you can access the online version of the entire Wall Street classic for free.