Peaking stock buybacks is consistent with the early stage of a long bear market.

Right — not a huge setback — but negative nonetheless.

Of course, it’s always possible that this is just the start of a temporary correction that so many market observers mention.

Then again, the decline thus far this year could be the start of a bear market.

Corporate executives are certainly behaving in a way which is consistent with the start of a major financial downturn.

You see, history shows that companies usually buy back their own shares at a record pace near major stock market tops.

With that in mind, here’s a March 22 Wall Street Journal headline:

Stock Buybacks Are on Course for Another Record

Analysts at Goldman Sachs recently said they anticipate buybacks to reach a record $1 trillion in 2022 — at least, that’s their forecast. However, investor behavior — whether on Main Street or in corporate suites — can change dramatically from what is expected.

Way before the end of the year, investor psychology may darken considerably.

The April Elliott Wave Financial Forecast, a monthly publication which provides analysis of major U.S. financial markets, picks up the story from here with this chart and commentary: 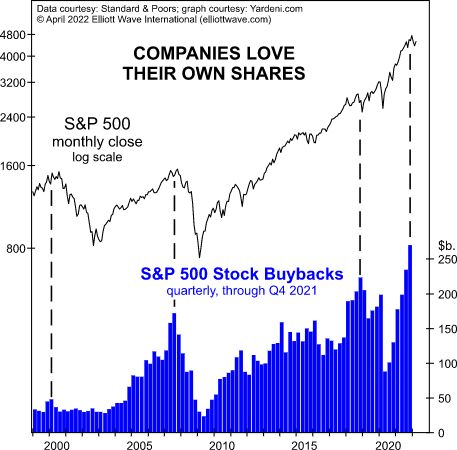 In the fourth quarter of 2021, S&P 500 companies bought $270.1 billion worth of their own shares. Record buybacks in the first quarter of 2000 and the third quarter of 2007 attended major tops. The latest record is a real barnburner, up a full 15.21% from the previous quarter’s total. … The Wall Street Journal reports that firms announced another $238 billion in buybacks in the first two months of 2022. … This overhanging optimism is consistent with the early stage of a long bear market.

Of course, “overhanging” optimism refers to companies buying back shares even though the market may have already started a downtrend.

Also keep in mind that just because the market turned down severely in 2000 and 2007 after record buybacks doesn’t mean it will do so again — or immediately.

However, the recent flurry of buybacks is something to keep in mind. And, so is the stock market’s Elliott wave structure, which puts the buybacks into context.

Learn more about the Wave Principle — and how you can apply it to your analysis of financial markets — by reading the entire online version of the book for free.

All that’s required for 100% free and unlimited access to Elliott Wave Principle: Key to Market Behavior is a Club EWI membership.

Club EWI is the world’s largest Elliott wave educational community and is free to join. Members enjoy free access to a treasure trove of Elliott wave resources on financial markets, investing and trading with zero obligation.