Livermore’s trading life started towards the end of the 1800s, just as Charles Dow was writing about the stock market in his Wall Street Journal. Dow’s writings became known as Dow Theory, and a central tenet of it is that an uptrend in the stock market has three phases: accumulation, participation and distribution. During the accumulation phase, strong hands (the minority) are buying from weak hands (the majority). As the uptrend grows, the public become increasingly participatory until, in the distribution phase, manic speculation takes hold and the strong hands sell (distribute) to the weak hands, who want in at any cost. Elliott wavers will, of course, recognize these three phases as being consistent with waves 1,3 and 5 of an advancing impulse wave in the stock market.

With this in mind, what are we to make of an incredible statistic that strategists at Bank of America have unearthed? According to their findings, monetary flows into global equity funds this year could surpass the entire cumulative flows of the last 20 years! Such has been the frenzy with which people have rushed into stock markets, if the first half pace is matched in the second half of 2021, more money will have gone into equity funds this year than the past two decades combined. This is jaw-dropping stuff.

Conventional analysts naturally see this as a bullish sign. It could be, but it all depends on the context of the previous trend. If global stock markets had traded sideways-to-down over the last twenty years and were now breaking higher amidst this massive volume then, yes, one might conclude that it is a bullish sign. And, indeed, you could make a case for this by pointing to European and Japanese stock markets which have done exactly that.

However, in the context of a global stock market index, even one that attempts to dampen the influence of the U.S. stock market such as the MSCI World Equal-Weighted Index, it’s very clear that the last twenty years has seen a strong uptrend. Therefore, this incredible surge of money suddenly rushing into global equity funds is yet more evidence of how mature and stretched the uptrend is. And consider this in the context of Dow’s distribution phase. As all this money has flowed into the stock market, measurements of ‘Insiders Selling’ (company directors, etc.) are at record highs. Are the strong hands selling to the weak hands in a classic end-of-uptrend distribution? Stay tuned to find out. 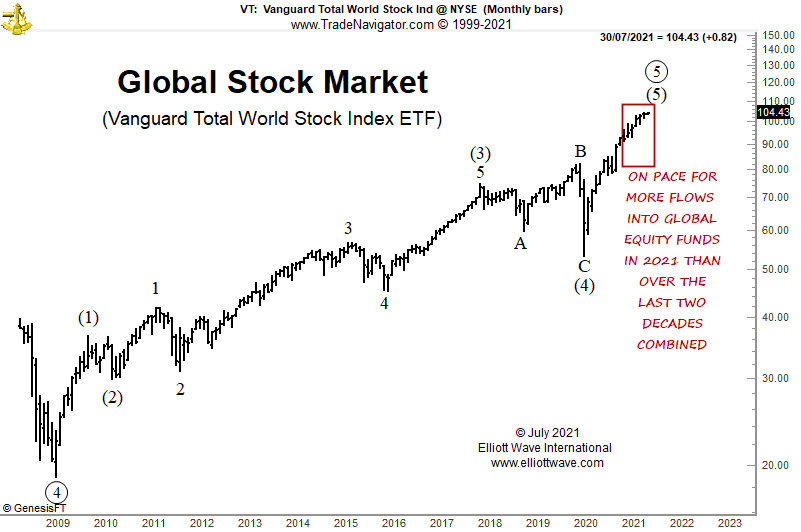 Investing for the long haul?

That’s what financial advisors say is the best way to build wealth.

But timing still matters. A lot.

Back in 2008, lots of people had to postpone retirement when stocks crashed. And in 2009, they were too scared to go back in — just as the stock market was starting its historical bull run.

The Elliott wave model helps you time these big-picture moments. For more market insights like this, you can sign up for free access to the Wall Street classic: Elliott Wave Principle: Key to Market Behavior.