U.S. Stocks: Here’s a Big Sign That “Sentiment Cannot Get Much More Extreme”
The stock exposure of the most bearish active investment managers is revealing

Short interest in the market has fallen to near-record lows.

Indeed, bullish sentiment is so extreme that even the most bearish among a group of professionals are behaving bullishly.

This chart and commentary from the February Elliott Wave Financial Forecast, a monthly publication which provides analysis of major U.S. financial markets, provide the details: 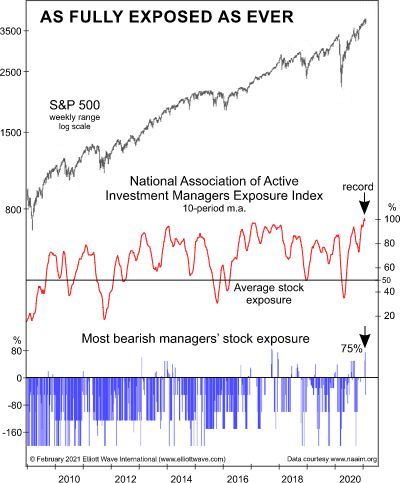 The chart shows that on a 10-week basis, the National Association of Active Investment Managers Exposure Index jumped above 100 in January, a new record extreme. Remarkably, even the most bearish NAAIM managers were 75% net-long equities. When even the bears are bullish, sentiment cannot get much more extreme.

A big reason why sentiment extremes are noteworthy is that they convey that there are relatively few market participants left to buy (or, in the case of a bear market, left to sell). Put another way, imagine almost every passenger crowded into one end of a boat. It won’t be too long before they’re all wet.

Of course, there are some serious market bears out there.

On Jan. 24, a CNBC headline reflected the warning of a well-known investor:

That investor had cited “business unfriendly policies” out of Washington as one of the main reasons for his bearish forecast.

Time will tell if that market prediction will play out.

However, do realize that the waves of investor psychology are not dependent upon “fundamentals” such as Washington’s business policies (or any other news). Just think, for example, that the current occupant of the White House was the U.S. Vice President from 2009 into 2017, the years when the stock market had almost tripled.

Indeed, Elliott wave analysis focuses on the market itself.

Sometimes the market appears to reflect outside conditions and events, but at other times it is entirely detached from what most people assume are causal conditions. The reason is that the market has a law of its own.

You can delve into the details of this “law” of the market by reading the entirety of Elliott Wave Principle: Key to Market Behavior — 100% free.

All that’s required for free access to the online version of this Wall Street classic is a Club EWI membership. Club EWI is the world’s largest Elliott wave educational community (approximately 350,000 members) and is free to join.