What the “Sudden, Dramatic” Surge in Googling “Inflation” Tells You
It likely “typifies the end of an old economic trend and the beginning of a new one”

In the news, you hear that the big monetary fear these days is the prospect for a jump in inflation.

Here are some headlines since the start of the year:

However, keep in mind that similar inflation worries were pervasive a decade ago, when the U.S. Federal Reserve Bank was implementing its quantitative easing programs (QE1, QE2 — these terms probably ring a bell) and just about every year since. Even so, runaway inflation never took hold. Why?

Here’s a perspective you won’t find anywhere else, from the just-published March Global Market Perspective, a monthly publication from Elliott Wave International which provides analysis of 50-plus worldwide markets: 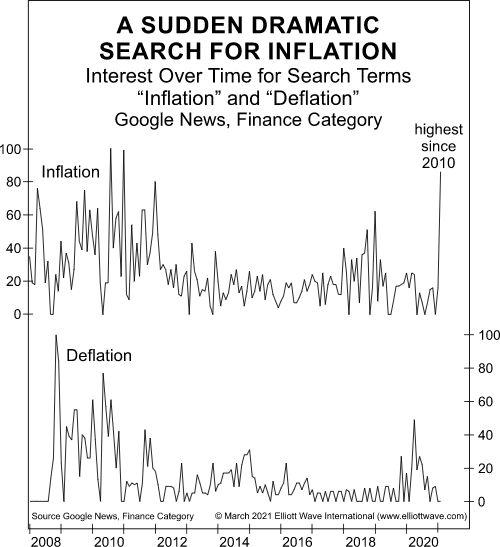 The number of articles containing the word deflation has been stuck at zero for three out of the past five months, while inflation stories have steadily increased. This kind of contrary sentiment precisely typifies the end of an old economic trend and the beginning of a new one. In fact, the financial media’s preoccupation with rising prices is nearly identical to that of January 2012, when GMP definitively stated: “The inflation panic is out of whack with prices.” Back then, a similar inflation scare had taken hold, as the … CRB index of core commodity prices completed a two-thirds retracement of its sell-off from June 2008 to February 2009.

Financial history shows that a rise in stock market prices is generally followed by an expanding economy. So, the current uptick in inflation is not surprising. Of course, that certainly doesn’t mean that this uptick will last indefinitely.

Indeed, the chart pattern of the CRB Index of core commodity prices (which our March Global Market Perspective analyzes and explains) shows why a trip to the grocery store or filling up your vehicle’s gas tank may get cheaper sooner than many observers expect.

Indeed, it appears that the next big monetary will be deflation — not inflation.

As Elliott Wave International’s special free report “What You Need to Know Now About Protecting Yourself from Deflation” says:

Protect your wealth and take steps to get financially safe before the next monetary event becomes obvious to the crowd.

You can get more insights into preparing for what relatively few expect by reading the entire special free report.

Just follow this link: What You Need to Know Now About Protecting Yourself from Deflation — free access.