Economic “Hurricane”: Here’s a Take on a Bank CEO’s Warning
Here’s what reached a nadir as the war in Ukraine broke out

On June 1, a CNBC headline said:

Yes, the U.S. central bank is engaging in so-called “quantitative tightening” and the war persists in Ukraine.

Yet, those cited “causes” of a possible economic “hurricane,” like a severe recession or even a depression, are results themselves. For instance, the war in Ukraine resulted from a shift in social mood — going from positive to negative.

The April Elliott Wave Theorist, a monthly publication which provides analysis of financial markets and cultural trends, drives the point home regarding the war in Ukraine with this chart and commentary: 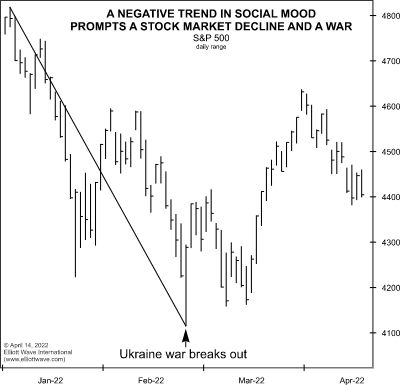 The outbreak of the war coincided not with the start of a decline in U.S. stock prices, as so many investors feared it would, but the exact low prior to a rally that persisted throughout the fighting. The rally is not due to the bizarre formulation that war is bullish; it is due to natural waves of social mood that had reached a nadir when the war broke out.

Regarding Fed tightening as a contributor to a possible economic crisis, realize that the Fed merely follows the market, it doesn’t lead. In other words, investor psychology is the true cause of the rise in rates.

Interest rates (or bond yields) began to rise well before the Fed started to raise its fed funds rate this year.

Fed officials voted to start lifting rates on March 16. Yet, the yield on the 10-year Treasury note bottomed back in 2020 and has been climbing since.

Getting back to the economy, the 1.4% decline in U.S. GDP in Q1 was recently revised downward to 1.5%, so an economic contraction may already be underway.

Returning to that mention of “natural waves of social mood” in the April Elliott Wave Theorist quote, you can get insights into these “waves” by reading Frost & Prechter’s book, Elliott Wave Principle: Key to Market Behavior.

If you’d like to read the entire online version of the book, you may do so for free once you become a member of Club EWI, which is the world’s largest Elliott wave educational community (approximately 500,000 members worldwide and growing).

A major benefit of a Club EWI membership is complimentary access to a wealth of Elliott wave educational resources on financial markets, investing and trading.

There’s no cost involved in joining Club EWI and no obligations.

Get started right away by following this link: Elliott Wave Principle: Key to Market Behavior — free, unlimited and instant access.