Why the Timing of the Next Economic Slump May Surprise — Big Time
“The stock market leads GDP,” not the other way around

Do you recall how many government officials, economists or bankers anticipated the severity of the “Great Recession” before late 2007 into 2009?

Do you recall even one?

If a name doesn’t come to mind, that’s because hardly anyone of prominence provided a warning. Indeed, just the opposite.

Granted, this view by a group of economists was early in 2007, but still — a historic stock market top was then only six months away and the start of the Great Recession was only eight months down the road.

The public thought the smooth sailing would continue as late as mid-year of 2007.

Look at this quote from a June 20, 2007 Pew Research Center article:

Most Americans expect that the good times will continue for homeowners and sellers.

Alas, the makings of the “subprime mortgage meltdown” were already in place and poised to jar the entire global financial system.

Knowledge at Wharton is the name of a business journal from the Wharton School at the University of Pennsylvania and after the worst of the financial crisis, it offered a May 2009 retrospective with the title:

Why Economists Failed to Predict the Financial Crisis

The whole point is that the worst economic slump since the Great Depression was largely unanticipated. Why? As Elliott Wave International has stated many times, most people tend to linearly extrapolate present conditions into the future. And, those conditions had been largely positive for several years prior to the financial crisis, i.e., a booming housing market and rising stock prices.

It’s not the first time financial and economic observers have been sorely surprised, as this Barron’s headline states (October 20, 2021):

The 1929 Stock Market Crash Caught Nearly Everyone Off Guard …

Here in May 2022, there are professional economic observers who anticipate a slowdown in the economy but that’s not exactly going out on a limb. Meaning, almost everyone and their uncle believe the Fed tightening will cause the economy to slow. Besides, the economy has already contracted. It did so by 1.4% in Q1.

Yes, stocks lead the economy, not follow. The evidence is supplied by a chart and commentary from Robert Prechter’s landmark book, The Socionomic Theory of Finance: 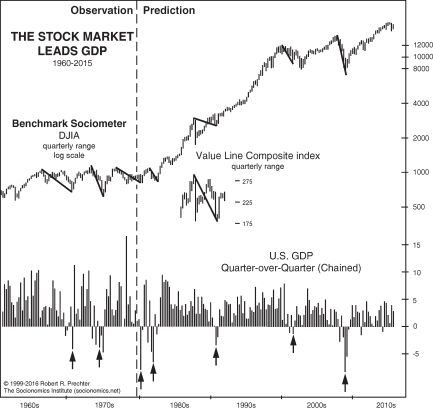 As you probably know, that recovery in the Dow Industrials and S&P 500 index since the 2009 low extended all the way into January of this year.

If the financial downtrend that’s unfolded since then is the start of a big bear market, the next economic contraction may be much more severe than many observers anticipate.

Hence, it’s important to keep your eye on the stock market’s Elliott wave structure so you can prepare for what is likely next — both for stocks and the economy.

If you’re new to Elliott wave analysis or need a refresher, you are encouraged to read Frost & Prechter’s Elliott Wave Principle: Key to Market Behavior. Here’s a quote from the book:

Get more insights into the Wave Principle by reading the entire online version of the book for free.

Club EWI is the world’s largest Elliott wave educational community with approximately 500,000 worldwide members. Hop on board and you can enjoy complimentary access to a wealth of Elliott wave resources on investing and trading without any obligations.

Just follow this link and you’re on your way: Elliott Wave Principle: Key to Market Behavior — free and instant access.