Stocks: Is the Really Scary Part Just Ahead?
Here’s one of the actions which investors take when they get “rattled”

Big daily selloffs have occurred since the stock market’s downtrend began in January.

Yet, most investors aren’t exactly shaking in their boots. Panic is absent.

After the market close on May 18, the U.S. Short Term Update, a thrice weekly Elliott Wave International publication which analyzes near-term trends for major U.S. financial markets, showed this chart and said: 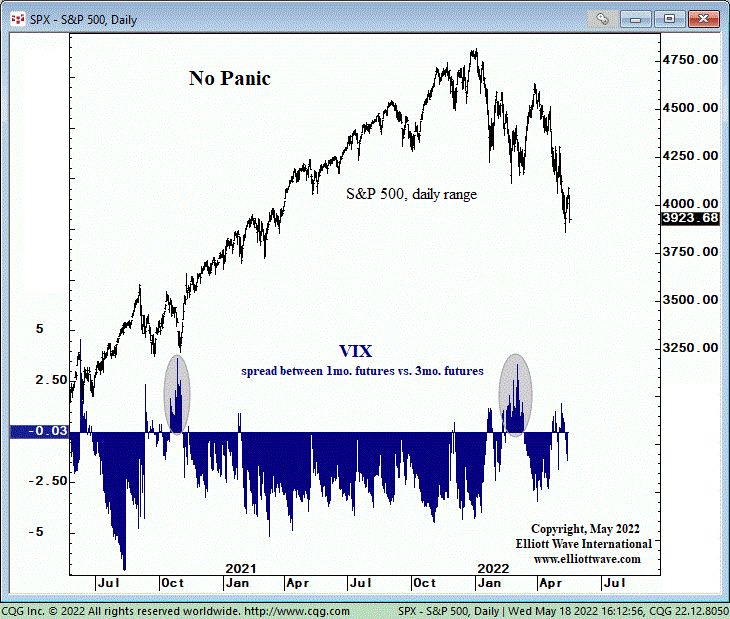 Traditional measures of investor complacency and panic, such as the CBOE Volatility Index (VIX), remain somewhat subdued relative to prior extremes over the past six months. One of the ways we measure the level of investor panic is to compare the one-month VIX futures contract to the three-month VIX futures contract, which is shown by the histogram at the bottom of the chart. When investors are rattled, they bid the short-term contract (one month) above the longer-term contract (three month), feeling as if they need “protection” from a falling market now versus later (see grey ellipses).

During the most vicious phase of a major bear market, the spread between the one- and three-month futures contract should dramatically soar.

In the meantime, there was this headline just two days after that big May 18 selloff (CNBC, May 20):

Yep, many market participants are still viewing the drop in prices as a time to go bargain hunting rather than running for the hills.

Memories of the longest bull market in history die hard. Remember, it started back in March 2009.

Down more than 25%, the NASDAQ is “officially” in bear-market territory.

“Big whoop” as they used to say — some of the hi-tech darlings have already been cut in half and then some. Bet the folks down 50% or more in their so-called investments are glad to hear they’re “official.”

And now Bitcoin, the King of Cryptos, has hit an “air pocket” of its own and fallen below $30,000. Wonder if that’s officially a bear market, too?

This excerpt from EWI’s May Financial Forecast explains how it all fits together.